First treble for Landers as Gendarme lays down the law 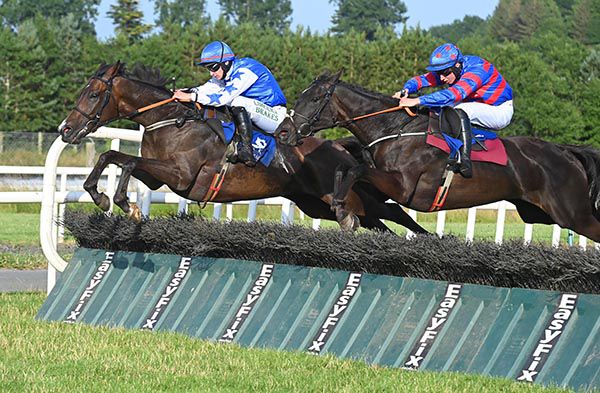 The 9/4 favourite Gendarme won the second division of the 2m handicap hurdle for horses rated 80-95 to complete a great evening for jockey Cathal Landers.

After earlier wins on Whosgotyanow and Royal Recital, victory on the 6-year-old Lawman gelding completed a near 89/1 treble for the rider.

Landers brought his strong-travelling mount through to challenge Cornerkova (7/1) as the field bypassed the second-last hurdle (rider Shane Mulcahy was thankfully later to rise after a fall on the first circuit) and sent him on after the last to beat that rival by two and a half lengths.

Winning trainer Cathal Byrnes said: "It is great to get a local winner and the syndicate are from the Castlemahon and Newcastlewest area. They got off the mark the last day in Tramore and that form has been franked here all day with the second (Royal Recital) and fifth (Profound) winning.

"He enjoys that ground and Cathal gave him a great ride. That's his first treble today and he comes in a couple of mornings a week.

Looking ahead to next week, Byrnes added: “Thosedaysaregone will get in to the Galway Hurdle and Philip (Byrnes, brother) will ride. We also have Advanced Virgo but he is only rated 131 and is 40 on the ballot so won't get in."