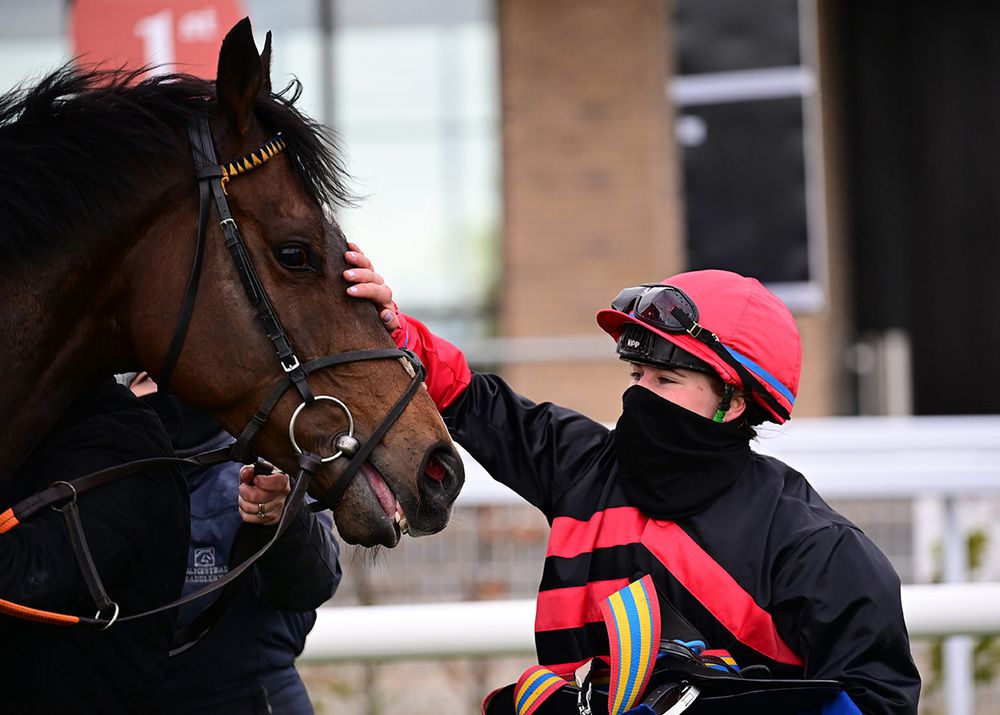 Zephron (20s this morning, 10s into 11/2 joint favourite on the show) landed a gamble in the concluding Sentinel Ireland Handicap and gave Annalise Cullen her first winner when storming up the near side rail to win going away.

Anything drawn low was out of the equation from after halfway as all the action was towards the near side with eventual second Majeski Man (11/1) and third home Roxette (11/2 jt fav) making the best of their way home.

The eventual winner was making good ground in their slipstream and, when Roxette drifted right a little, a gap presented itself and the Ivawood gelding was driven clear for a decisive two and three quarter length victory.

A maiden winner at Tipperary last term, Zephron came here with two solid runs in 7f handicaps under his belt this season and handled the drop back in trip well with headgear reapplied.

The winning rider had some success in pony racing and is, of course, a grand-daughter of the late Michael O’Brien.

Winning trainer, and proud father of the jockey, Denis Cullen said: “I'm delighted. He's run two good races already this year and Annalise, in fairness, has been giving him a good old cheery ride. We're delighted with that.

'The six was good for him and the cheekpieces worked out well. She gave him a great ride, she just stuck to the rail and went along.

“I'm delighted for her to get her first winner at the Curragh, the home of Flat racing and a classic track.”

19-year-old Annalise Cullen added: “It's unbelievable. He was there for me every step of the way and travelled great. I got a lovely split up the rail and he kept finding for me.

“I've been riding this horse since he was a two-year-old so I know him like the back of my hand.”