Fitting winner as Rapid wins in the Potts colours at Punchestown 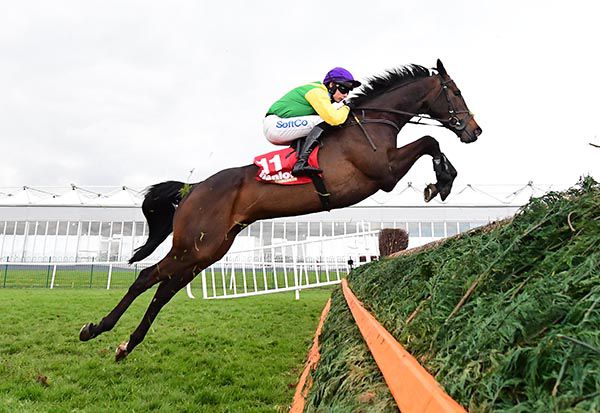 After a double here on Wednesday Jessica Harrington put another Punchestown 2021 winner on the board in the Grade B Hanlon Concrete Irish EBF Glencarraig Lady Francis Flood Mares Handicap Chase with Rapid Response.

Wexford jockey Sean O’Keeffe of course made the breakthrough at Cheltenham this year on Galopin Des Champs, and he capped off a good campaign as he got Rapid Response up on the line to win by a neck.

It could have been different for runner-up and favourite Scarlet And Dove had she not hit the second last hard, but it was a good display in any case from the successful daughter of Network, owned by Ann & Alan Potts Limited.

O’Keeffe was in their second silks (purple cap) as Magic Of Light carried the principal set (red cap).

The money was for Rapid Response though (11s into 9s) as top-weight Magic Of Light (18/1) pulled up early after being slow at the second.

Said Mrs Harrington’s daughter Kate afterwards: “We always thought there was a big one in her and it’s lovely to see her go and do that.

“It’s quite fitting for the week that’s in it, that the Potts' have a winner, with them donating a statue of Sizing John.

“It was a race meeting that Alan and Ann always loved to come to each year. Magic Of Light won it off a mark of 128 back in 2018, and I think Rapid is going to be an exciting staying filly going forward.

“It was the plan all year to aim her at this and it was very exciting just getting up on the line. As a young horse Ann had a very fond connection with her before she passed away.”

The Irish Horseracing Regulatory Board Veterinary Officer examined Agusta Gold, trained by W.P. Mullins, at the request of the Stewards and reported the animal to be post race normal.

R.M. Power, rider of Magic Of Light trained by Mrs Jessica Harrington, reported to the Clerk of Scales that his mount never travelled and nearly refused the second fence.

Ciaran Murphy, trainer of Bridge Native, reported to the Clerk of Scales that his charge was found to be in season post race.

Patrick Mullins gets another opportunity to finally break his duck in the prestigious Connacht Hotel Handicap on the opening day of the Galway Festival.

Ghiani riding on crest of a wave

Life in 2021 just keeps getting better and better for Marco Ghiani.

Deauville next for Primo Bacio

Primo Bacio will attempt to break her Group One duck in the Prix Rothschild at Deauville on August 3.