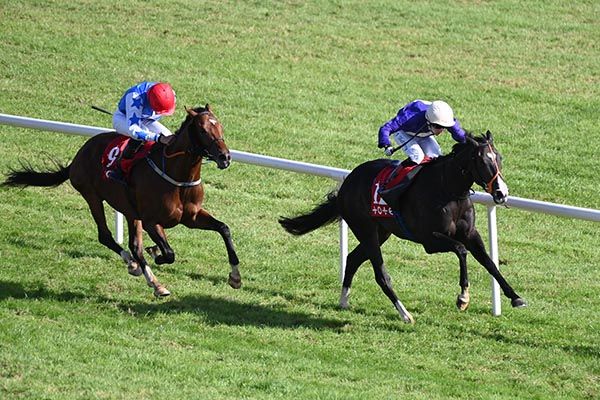 Flame Of Eire brought up her four-timer in grand style in the Tote Ireland Handicap over 1m1f in Listowel.

The Mehmas three-year-old had been in cracking form in landing handicaps at Limerick, Galway and Bellewstown in the summer.

She continued her winning spree with a power-packed performance under Andy Slattery. She began her run off a mark of 59 and competed off 78 here.

She was settled behind the pace at the halfway stage and closed travelling well as the field straightened for home.

Slattery held on to her as long as he could and then pressed 'go' as she was unleashed approaching the final furlong.

The 9/1 shot skipped beautifully over the ground at the business end as she pulled clear with Eloquent Arthur (14/1) who couldn't land a glove on her. There was a length and a half between the pair at the winning post. The Blue Panther (20/1) was a couple of lengths further back in third.

Trainer Andrew Slattery said: "We might go again on Wednesday, she is in at Bellewstown and we'll see how she is. I know it's a bit greedy going for five-in-a-row but we'll probably finish up for the year with her then. I'll probably aim her for the Lincoln next year.

"She has a nice pedigree, keeps improving and the only negative was she was drawn 18. I knew she was as good if not better than the last day.

"I've never had a horse win four races in a row, it isn't too many people have!"