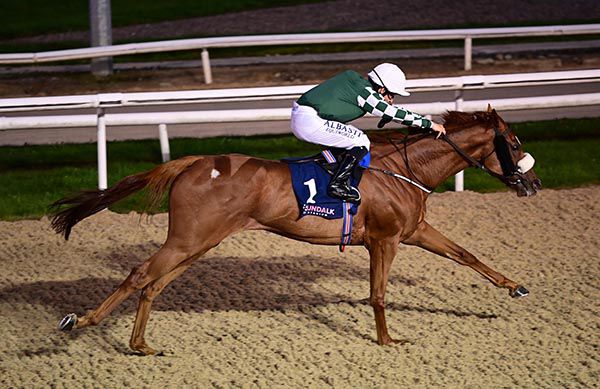 A Group Two winner last season, the 15/8 favourite Leo De Fury got back to winning ways in the Join Us On Instagram @dundalk_stadium Race.

The Australia gelding tracked the front-running Benaud and was pushed along by Shane Foley entering the straight. He hit the front over a furlong out and forged clear to beat Benaud by three and a quarter lengths.

It was a fourth career success for the 5-year-old who was making a quick reappearance having finished fifth to Camorra in a Group 3 at Leopardstown last weekend.

It was a double for winning trainer Jessica Harrington after Exquisite Acclaim had won under Foley in the same colours earlier, while it was a treble for the latter who had also been successful on Sister Lola.

“He was the best horse in the race,” said Foley

“Obviously he's a bit older and he had to give away weight but it was a good bit of placing by Mrs Harrington.

“He ran well on Champions Weekend in a slowly run race. Conor (Hoban) took his time then and the horse that broke down stopped his momentum a bit. He would have finished a good bit closer.

“It's great to get another winner. He's a lovely horse, he's just a bit off being a real good horse and he has to be minded as he has had a few little niggly things here and there. He's a legend and a stable favourite.

“It was a slowly run race tonight and I had him going early, but with him getting a bit older he's probably lost that little bit of zip that he had. A mile-and-a-half is good for him now.”