Foley excels with double to give Halford birthday winner 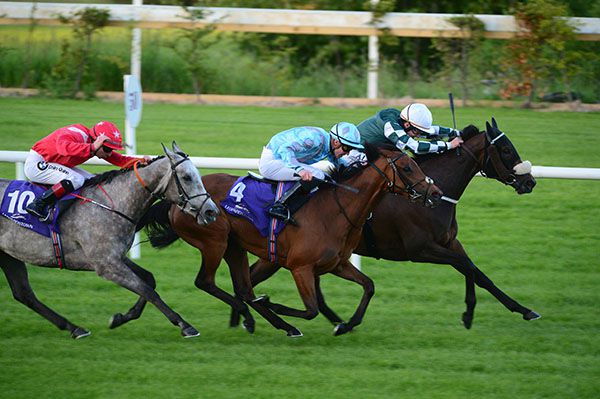 Michael Halford struck with a winner on his 57th birthday as Shane Foley completed a Leopardstown double on the Zhang Yuesheng-owned Libras Power (16/1) in the concluding Leopardstown Members Handicap.

The victorious Slade Power filly still looked green in the hood and cheek-piece combo, but Foley got the best out of the three-year-old to touch off Syrena and Paris Duvet by a short head and a neck.

A Step Too Far was eye-catching, two lengths back in fourth.

Another one from that County Waterford stable, Queen Guanhumara was backed from 5/1 into 3/1 favouritism but she had to settle for sixth.

Shane Foley rode the opening race winner on the programme for this boss Jessica Harrington, Cayenne Pepper, on debut in the fillies maiden.

Those lucky enough to be on the Kilkenny man’s brace were rewarded at odds of 118/1.

“It’s always very competitive in that bracket and it’s great to get a win for her as she has a lovely pedigree and she’s in foal to Saxon Warrior," explained Halford.

“Shane gave her a brilliant ride and it’s nice to get the job done with her. I’d imagine that will be it for her now.”