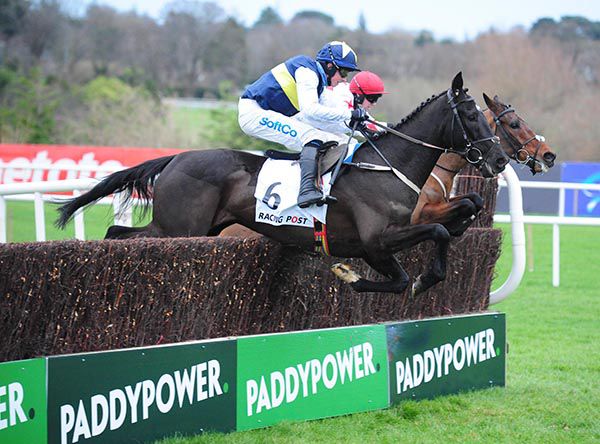 Franco De Port stepped up on his debut fencing success to give trainer Willie Mullins a record seventh Grade One Racing Post Novice Chase at Leopardstown.

The five-year-old won a beginners’ chase at Thurles a month ago, on his first race since disappointing in the Coral Cup Handicap Hurdle at Cheltenham in March.

This represented a huge hike in class, but Franco De Port (8-1) proved up to the task. He was kept away from the pace set by Felix Desjy and Benruben, while Franco De Port’s stalemate Blackbow came down at the third fence.

Darver Star and Benruben led the field four out, and while Felix Desjy got back into contention before the second-last by that point Bryan Cooper had brought Franco De Port to challenge and he hit the front at the final fence before going on to land the spoils by four and a half lengths from Darver Star.

Franco De Port was given a quote of 16-1 for the Sporting Life Arkle Trophy at the Cheltenham Festival with Betfair and Paddy Power and was cut to 33-1 from 50-1 for the Marsh Novices’ Chase with both firms.

Mullins said: “That was a nice surprise. He jumped great and capitalised on the very fast early pace which seemed to catch out a lot of the runners.

“Bryan was terrific, just keeping him together and keeping him jumping. He took what was left to him after they went too fast early on.

“He could stick at that trip, but you’d obviously look at a longer trip for him, maybe two and a half.

“I’d imagine the Dublin Racing Festival will be the plan, we’ll see how he comes out of this race today.”

He also had praise for the winning rider, saying: “Bryan is a top jockey who took his chance today and took it very well.

“We had a fair idea the way the race might work out. We played for that and it worked out."

The Stewards enquired into possible interference on the approach to the home turn involving Darver Star, ridden by J.M. Moore, placed second, Embittered, ridden by S.W. Flanagan, placed fourth and Felix Desjy (FR), ridden by J.W. Kennedy, placed third, where it appeared that Embittered ran short of room when racing close to the running rail. Evidence was heard from the riders concerned. Having viewed the recording of the race and considered the evidence, the Stewards made no alteration to the Judges placings. They did, however, find that the interference was caused by J.M. Moore riding carelessly this being a breach of Rule 214. Having taken his previous record into consideration, the Stewards suspended J.M. Moore for 4 racedays. Mr. Roderick Ryan, Acting Steward, absented himself for the resumed portion of this enquiry.