Funny Money Honey off the mark in Listed company 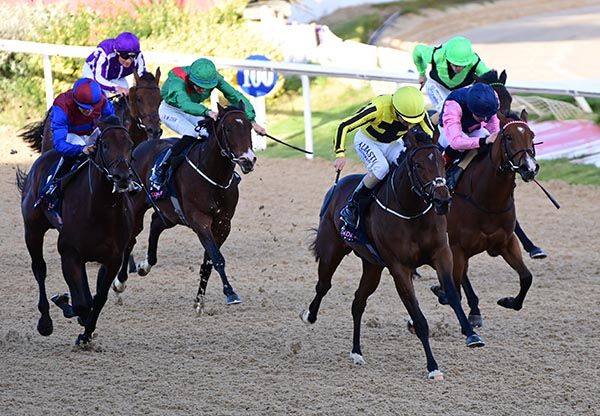 Funny Money Honey blitzed her rivals from the gates in Dundalk and brought up plenty of bets in the Listed Legacy Stakes at Dundalk.

She blasted into the lead in this five-furlong dash and made all. She had British-raider Malrescia in close attendance approaching the final furlong, but kept up the gallop to score by three parts of a length. From 12/1 in the morning, she was returned at 11/2.

Malrescia took the runner-up berth at 6/1 and was half a length in front of Congo River (5/1cf).

Jockey Shane Foley said: "She has a lot of pace. I rode her for the first time in Salisbury (in a Group 3 over 6f) and I said to Jessie (Harrington) 'I think I might have won over five furlongs'. She just has a lot of natural pace. She gets three lengths out of the gates.

"She just loves to jump and travel and a bend really helped her today just to get the five furlongs.

"A good performance. She did stay going, I was trying to nurse her but I wanted to keep the momentum going forward at the same time."