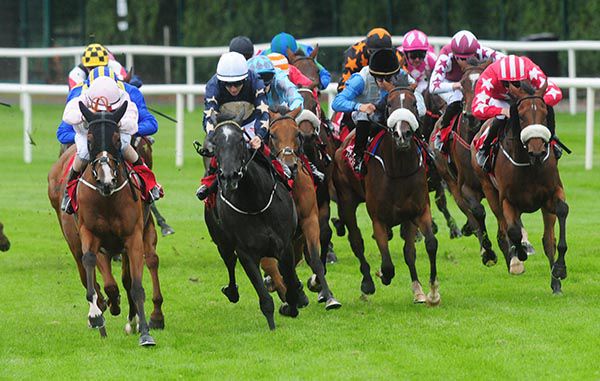 Galtee Mist recorded a 20/1 shock when just holding on under Colm O’Donoghue in the Claytonhotelgalway.ie Handicap.

The Joe Murphy-trained filly got the season off to a bright start when taking a maiden at Gowran Park back in May but had dropped down in the ratings following four subsequent outings.

O’Donoghue’s mount raced keenly in front and Syrena threw down a strong challenge inside the final furlong.

However the front-runner just held on by a head, with the always prominent Cruella Dovil a length and a half back in third.

Murphy said, “She surprised me the way she’s done it. I was a bit worried this morning as she hadn’t eaten up last night. We took her temperature and scoped her and she scoped perfect.

“She’s very genuine and very game. She thinks she’s a six-furlong filly but actually stays better than one would think.

“The draw helped her and Colm gave her a great ride. She just held on.

“Tom (Egan) is a great supporter of ours and we go back a long way. He bought her himself.”

Master Matt one for Smith

Master Matt came out best after a final-furlong battle with Trading Point in the www.listowelraces.ie Handicap.

Bolger and Manning double up with Agitare

Jim Bolger and Kevin Manning doubled up at Listowel with Agitare who belatedly got off the mark in the Jet & Peggy O'Carroll Memorial Maiden.

Jim Bolger's Sheer Bravado was the authoritative winner of the second split of the Feale Handicap in Listowel.

Angel Palanas returned to winning ways in division one of the Feale Handicap at Listowel.