Galvin makes it six on the bounce 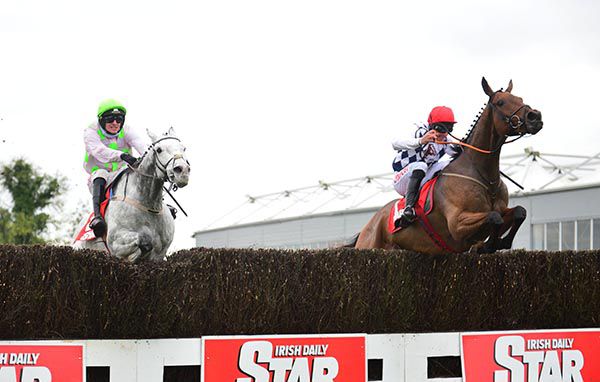 Making his first appearance since winning the National Hunt Chase in March, the Gold Well gelding tracked the leaders in third under Davy Russell before improving to challenge at the second-last.

Brahma Bull could find no extra at that stage but his stablemate Annamix was still in with his chance at the head of affairs. Galvin joined that one between the final two fences and gained the upperhand on the run-in to see off Annamix by half a length.

Ronnie Bartlett’s 7-year-old, who rattled up a five-timer in bumpers and hurdles at the start of his career, had been in the care of Ian Ferguson when winning at Cheltenham in the spring, but is now back under the guidance of Gordon Elliott.

Winning trainer Elliott remarked: "I thought it was a good performance with the weight he had and we knew he was going to come on plenty from it. He was up against two race-fit horses.

“He’s in Down Royal and is a horse to look forward to for the season. It’s a race that could cut up and he looks like he’s entitled to take his chance in a Grade 1.

“We missed Listowel as we thought it was coming a bit too soon for him and he’s having a good blow after that race today.

“He only really does what he has to do but he’s a grand honest horse and this has been a lucky race (seventh win) for us.

“He might be more of a Grand National horse than a Gold Cup horse but he knows how to win.