Gamble comes up short as Cracking lands the spoils 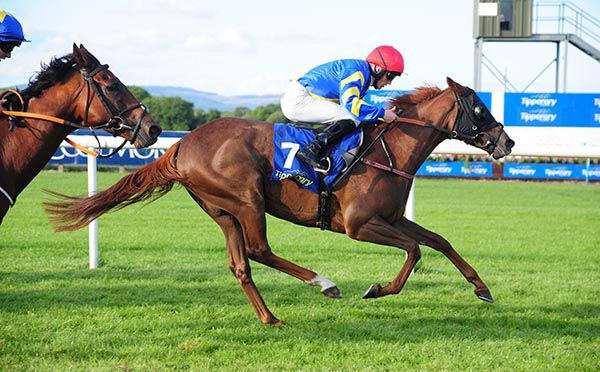 Cracking Name recorded her second success of the season, as she held off the well-backed favourite Royal Admiral in the @TipperaryRace Handicap.

Successful at Cork in June, the winning daughter of Famous Name finished fifth and eighth on her two starts since.

Available at 16/1 this morning, she eventually went off an 8/1 chance in the colours of the Cracking Name Syndicate.

Settled in mid-division, the chestnut victor was pushed along from two furlongs out, was ridden to the front over a furlong from home, keeping on well from there to score by three parts of a length.

It was an altogether different story for the aforementioned runner-up, who was available at 16/1 in early shows, going as short as 7/2 on-course, before being sent off the 9/2 market leader.

Slow into stride, the Colin Keane ridden gelding raced towards rear, and while he made up significant ground in the straight, he couldn't reel-in the winner.

Alwarda completed the placings another length and a quarter back in third, with Declan McDonogh aboard this 12/1 chance for Tim Doyle.

Marnane said afterwards: "That's her second win for us and she seems to be getting quicker if anything. She travels well and hopefully if the handicapper isn't too hard on her there might be another one in her.

"She is no superstar but she tries hard and is genuine. She seems to love that ground.

"We bought her for E8,000 in a claimer and has won two now and hopefully she can win three for us. We bought her with a view to keeping her for the summer so we'll see what the lads want to do at the end of the year."

The Stewards ordered the withdrawal of Lady Rosebud, trained by Patrick Martin, for failing to lodge the passport in accordance with the provisions of Rule 90 (i).

The Stewards ordered the withdrawal of Toffee Tart (GB), trained by Mrs Ann Mooney, for failing to lodge the passport in accordance with the provisions of Rule 90 (i).

Hazran pops up at 40/1 in Killarney

Hazran put in a stout staying performance in the extended two mile handicap at Killarney.

Fall For A Kiss a brace for Keane

Colin Keane was seen at his best in winning on John Murphy's Fall For A Kiss in division two of the Killarney Outlook Handicap over an extended mile.

Ryan Sexton booted home the second winner of his career on board Angel's Trumpet in the first split of the extended mile handicap at Killarney.