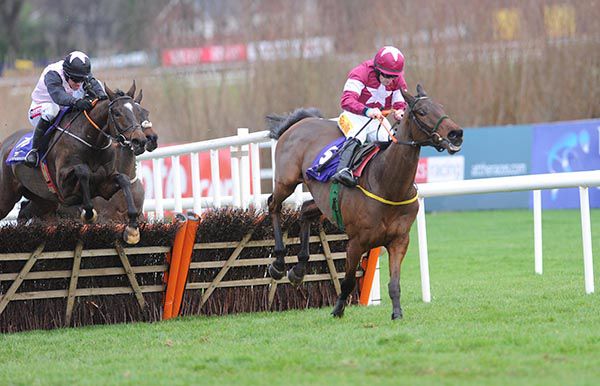 Barry Geraghty came in for a winning spare ride on Malinas Jack (8/1) in the opening maiden hurdle at Leopardstown.

His mount stayed on to close on Diol Ker at the last but that rival jumped it awkwardly, stumbled and pecked badly upon landing throwing his chance away.

Geraghty rode Malinas Jack past him and the pair ran on well in the final 150 yards to take the honours from Foxy Jacks (20/1) who got to within three parts of a length at the line.

Trainer Henry de Bromhead said: “He’s a nice horse and had good bumper form last year. We bought him after he was second to Acey Milan in a Listed bumper at Cheltenham in January.

"We gave him a run in Punchestown but he was a little fla, and we let him off and have been schooling him. Hopefully he’ll keep improving.

“It’s a lovely spare ride for Barry and a shame for Noel (Fehily). Noel’s flight was delayed for a few hours but he expects to be here soon.”

Elite Charboniere was the red hot 4/6 favourite on his Irish debut for Willie Mullins having won a French bumper in his homeland, however, he weakened when holding every chance in third turning for home.