Gibney's Play The Game settles from the front to win 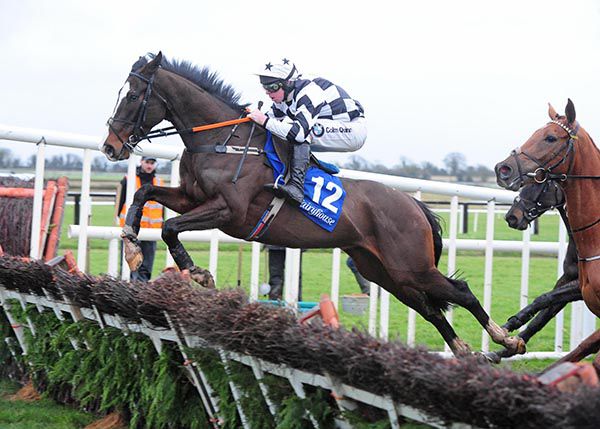 Alan Fleming saddled the second and fourth, but it was the Tom Gibney-trained Play The Game that took the lion's share of the prize-money on offer by winning the Easter Festival 1st-3rd April Maiden Hurdle at Fairyhouse.

Andrew Lynch rode the 11/4 shot for owner Derek Kierans, and the Lawman gelding made all.

He opened up in the straight, but at the finish Play The Game held on by just a length from Fleming's Champayne Lady.

It was sixteen lengths then to Political Policy in third, and another thirteen to Khudha (2/1 favourite for Fleming, Denis O'Regan and Barry Connell) in fourth.

"It's great to get a win with him. He's got a lot of ability as he's shown on the Flat and indeed over hurdles already," said Gibney.

"It's all about relaxation for him. If he settles he's very good. It's great to get a result with him and it'll do him good. I'm not sure where we'll go now."

C.D. Timmons, rider of Hidden Commotion trained by Edward Cawley, reported to the Clerk of Scales that his mount lost both front shoes in running.