Gigginstown double their tally at Navan 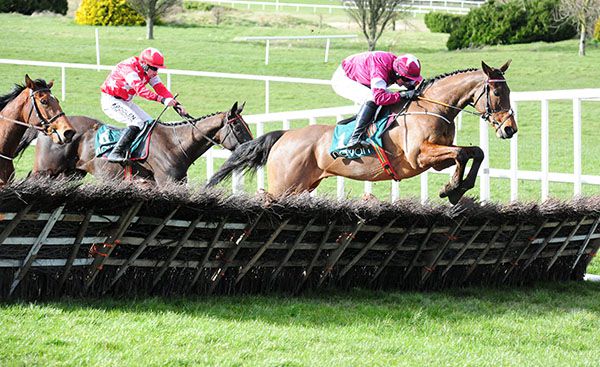 Gigginstown House Stud were on the mark for the second race in succession at Navan with Punitive defying top-weight in the Athboy Handicap Hurdle.

Aided by Hugh Morgan’s seven pound claim, the Henry de Bromhead-trained victor followed up on his course and distance success from January 18th. Scarlet And Dove took the preceding mares maiden hurdle for Gigginstown, and here Punitive was similarly always to the fore.

He led, made slight mistakes at the second and the seventh, and the 5/1 favourite was headed entering the straight.

Pushed along and disputing three out, the Shantou gelding was ridden and led again after two out. The six-year-old stayed on well on the run-in to beat Even Flight by three lengths.

“It's nice to get back on him again and I have to thank Gigginstown and Mr de Bromhead for the opportunity,” said Morgan.

“They started racing early enough there and I didn't really want to be getting into it too much. I wanted to hold on to him as long as I could because he's lazy enough.

“It's a long way up the straight there, which I found out the last day as it took forever to get home there.

“It's nice to get a win on him again there.

“He could have done with a bit of company but I just made my own fractions out in front and I was happy enough I wasn't taken on. I was able to do whatever I wanted to do.

“You'd like to think on that ground that he'd be well able for further.”

S.D. Torrens, rider of Askann trained by Mervyn Torrens, reported to the Clerk of the Scales that his mount hung right.