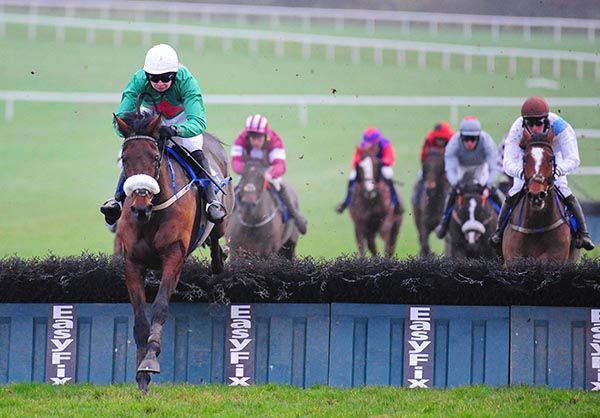 He made up ground in fourth turning for home but Gilligan appeared to stop riding for a few strides when closing in second after the penultimate flight.

Oneknightmoreihope was pushed out on the run-in to finish runner-up, beaten five-and-a-half lengths.

The following is the stewards report:-

The Stewards enquired into the running and riding of Oneknightmoreihope, ridden by Mr L.P. Gilligan, and trained by N.F. Glynn. Evidence was heard from the rider and trainer concerned.

He stated that had he gone for his horse earlier he'd have pulled himself up.

N.F. Glynn, Trainer, confirmed the instructions and expressed his satisfaction with the ride given. He stated that he instructed the rider to hold onto the horse for as long as he could as the horse needs coaxing.

He said he was delighted with the ride given and it was the very same as the one given at Fairyhouse. He stated that the horse just runs on and runs on but was never going to catch the winner on either day.

The Stewards also received a report from the Irish Horseracing Regulatory Board Veterinary Officer which stated that Oneknightmoreihope was post race normal. Samples were taken for analysis.

Having viewed the recording of the race and considered the evidence, the Stewards noted the explanation given by Mr. Glynn but found Mr. L.P. Gilligan in breach of Rule 212A(ii) as the horse was not seen to have been the subject of timely, real and substantial efforts and having taken his good previous record into account suspended him for 10 race days.