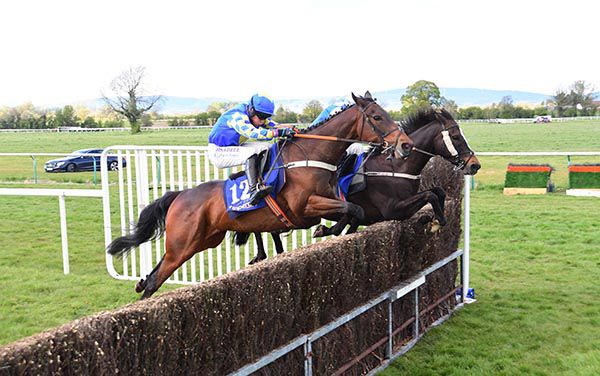 There appeared to be no fluke about the success as he hunted down 10/3 favourite Jack Holiday who had attempted to make all.

Give Me A Moment came to challenge the leader at the last and landed in the lead. From there he was driven out to win by two lengths.

This was the winner's handicap debut and he had a first-time tongue-tie.

Thisonesforollie (22/1) finished his race off strongly to get to within a head of the runner-up. Capture The Drama completed the placings in fourth at 25/1.

The trainer's son and assistant, James Griffin, said: "He was recommended by Mike Greaney and he was right - he told me he'd be a nice horse when he goes over fences. He got a very bad cut before Christmas and it has actually stood to him as he improved physically.

"It wasn't a surprise he won, I ride him out every day and he had been working savage lately with the application of ear-plugs. He is very keen and will get 2m4f when he learns to settle.

"His owners Douglas Pryde and David Van Der Hoeven both owned Aurora's Encore and have been so loyal and have stuck by us through thick and thin. They buy anything I recommend sight-unseen and without them I wouldn't be training.

"There is only Dad and I riding out and Adam (Short) rides out at weekends and has been with us for five years."

He added: "If it wasn't for Brexit, this horse would have gone over to run in the UK but we can't afford to pay €1,000 per horse to go, between customs and VAT, when previously it would have cost €300 on a shared trip.

"The chase programme book in Ireland is diabolical but he'll keep going now as he wants nice ground."

Strong bidding both on site and online produced consistent trade throughout the Day 1 session of the Derby Sale, resulting in 11 horses selling for €100,000 or more.

The ground at the Curragh is now good, good to firm in places ahead of the weekend action.

Jim Bolger is hoping that Mac Swiney can land more classic glory at the Curragh when lining up in the Dubai Duty Free Irish Derby on Saturday.