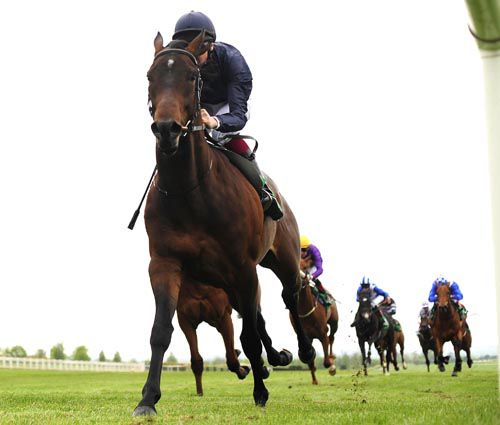 Cristoforo Colombo and Afonso De Sousa are two Aidan O'Brien entries in the Big Bad Bob Gladness Stakes at the Curragh on Sunday.

The high-class Cristoforo Colombo was last seen finishing a creditable sixth to the brilliant Wise Dan in the Breeders' Cup Mile at Santa Anita in November.

Afonso De Sousa has not had the same level of success as his stablemate but generally campaigns at a good level, although he would need to bounce back from a disappointing effort in the Irish Lincolnshire on his seasonal reappearance.

Custom Cut was successful in the Group Three event 12 months ago when with George Kent, but has since been sold and is now at David O'Meara's base in North Yorkshire and could bid for a repeat after a promising first run for his new trainer in a Listed event at Doncaster recently.

Paul Deegan's lightly-raced Sruthan promises to be a contender for some good prizes this season, having rounded off his three-year-old season with victory in the Group Three Concorde Stakes at Tipperary.

Jeremys Flame made some decent rivals look ordinary as she readily landed the Pertemps Lady Protectress Mares’ Chase at Huntington.

Robert Waley-Cohen is excited to see whether Noble Yeats can cement his Gold Cup claims with a bold showing in the Paddy Power Cotswold Chase at Cheltenham on Saturday.

Alan King insists Saturday’s Albert Bartlett Clarence House Chase is “not the be-all and end-all” for Edwardstone as he prepares for a mouthwatering clash with Energumene at Cheltenham.