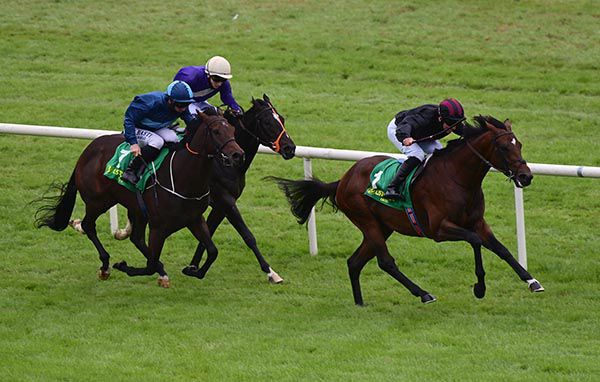 Mount Nelson was the Ballydoyle handler’s first winner of the French Group One in 2006 — and he has since added to his tally with Jan Vermeer (2009), Roderic O’Connor (2010), Johannes Vermeer (2015) and last year’s winner Van Gogh.

The Ioritz Mendizabal-ridden Aikhal won a Listowel maiden before finishing fourth to the talented Coroebus in Newmarket’s Autumn Stakes on his latest appearance.

Top-level honours are also up for grabs on the same card in the Criterium de Saint-Cloud (1.33pm), in which the Charlie Appleby-trained Goldspur will be expected to play a starring role.

So impressive on his introduction at Sandown, the Dubawi colt followed up with a narrow victory in the Zetland Stakes at Newmarket — proving his stamina for the 10 furlongs he faces again.

“We were pleased with how Goldspur won his race at Newmarket, when his stamina came to the fore,” Appleby told www.godolphin.com.

“He broke his maiden on soft ground, so conditions in France shouldn’t be an issue.

“This is another step up, but it looks the right race for him, and he brings a nice profile into it.”

O’Brien, who has won the race on four occasions, is this year represented by Stone Age.

The Galileo colt appears to have his work cut out as a four-race maiden, most recently finishing sixth behind Angel Bleu on Arc day at ParisLongchamp.

O’Brien said: “He stayed on nicely on his last run on Arc weekend, and that was only over seven furlongs.

“We always thought he was going to be a horse who would stay further. He seems to have been in good form since the last day.

“Hopefully the ground won’t be as heavy as it was in Longchamp.”