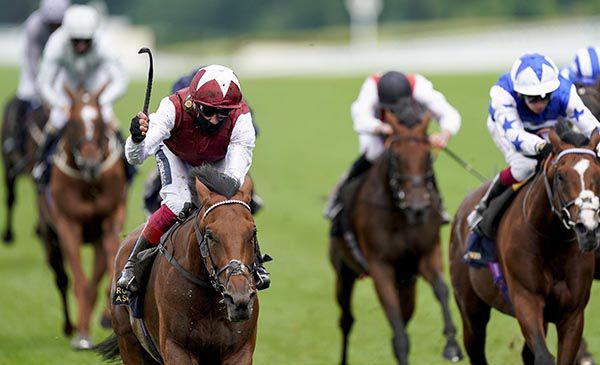 The daughter of Sea The Stars claimed the sixth and most notable victory of her career to date with an impressive display in the Hardwicke Stakes at the showpiece meeting in June.

She sidestepped a clash with esteemed stablemate Enable in the King George VI And Queen Elizabeth Stakes at Ascot and was expected to bid for Group One glory in last week’s Nassau Stakes.

However, she did not line up on the Sussex Downs, with Gosden revealing she has not been at her best on the Newmarket gallops.

“I’m just freshening her up. I was just not 100 per cent happy with her — that is why we haven’t run her since Royal Ascot,” said the Clarehaven handler.

“There is no immediate plan with her as she had two quick races, up at Haydock and then in the Hardwicke at the Royal meeting.

“The intention is to give her more of a late summer, early autumn campaign.”

The Prix Jean Romanet is among several options under consideration for Lady Bowthorpe following her heartwarming success in the Qatar Nassau Stakes at Goodwood on Thursday.

Bua Boy has come in for plenty of market support for the Guinness Galway Tribes Handicap Hurdle which goes to post at 5:00 this evening.

The going for this evening's fifth day of action at Galway is described as Good following a dry night.

Battaash out to raise the roof at Goodwood

Battaash bids to thrill the Goodwood crowds again with an unprecedented fifth triumph in the King George Qatar Stakes this afternoon.