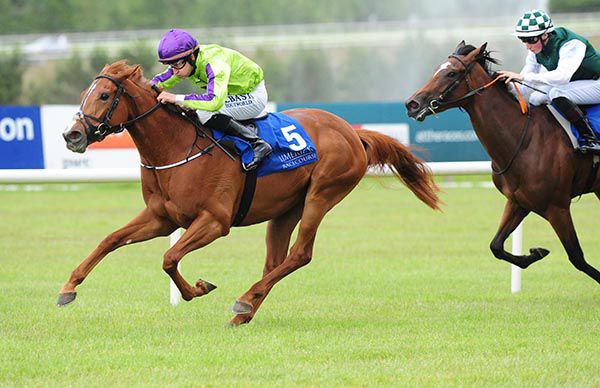 Stable jockey Shane Foley was aboard the It's All About The Girls-owned daughter of Tamayuz and she bettered favourite Princess Mayson by two lengths.

"There is still improvement to come as she didn't know what to do coming down the hill but once he gave her a squeeze she picked up well," further reflected Kate Harrington on the performance of the 9/2 victor.

"We'll look for a winners' race next."

The Stewards informed James M. Barrett, trainer that Silent Look, would have to be recertified before being declared to run from stalls again.

S. Foley, rider of Ha'penny Bridge trained by Mrs John Harrington, reported to the Clerk of Scales that his mount jumped right out of the stalls.

The Irish Horseracing Regulatory Board Veterinary Officer reported to the Stewards that Motown Magic trained by James M. Barrett was lame on the left fore post race.