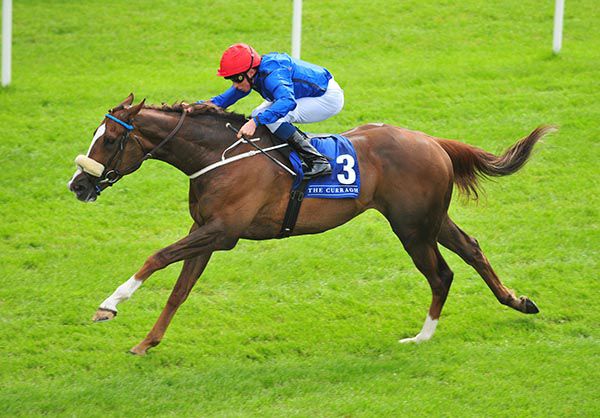 Saltonstall is ridden out by William Buick
© Photo Healy Racing

After winning the third with Platinum Warrior, Mick Halford doubled-up with Saltonstall in the Irish Stallion Farms EBF 'Habitat' Handicap.

Halford saddled five of the fourteen runners here, with three of them, including the winner returned at 7/1.

Second on his seasonal debut in the Lincolnshire at Naas in March, the son of Pivotal was a well-beaten third of four on heavy ground at Cork on his last start.

Settled behind the leaders he was fifth three furlongs out, and was ridden to the front with over a furlong left to race.

He kept on well under pressure inside the final furlong, holding off the late effort of Master Speaker (18/1 to 14s) by a length.

The front-running Massif Central (also trained by Halford) was third, while the 9/2 favourite Maths Prize finished fifth, after being squeezed for room two furlongs out.

"That was grand. He's a lovely big horse and he just got stuck in the ground in Cork. He had a good run in the Lincoln," said Halford.

"He's a big horse and and he's still only furnishing, there is little mileage on him. He handled that good ground well today and a mile is a good trip for him.

"I had the Hunt Cup in mind for him and there is no need to change after that."

* C. O'Donoghue, rider of Ambassadorial (USA) trained by M.Halford, reported to the Clerk of Scales that his mount lost his action during this race.

* S. Foley, rider of Tresorier (GB) trained by John James Feane, reported to the Clerk of Scales that his mount was feeling the ground inside the final one and a half furlongs.

* W.M. Lordan, rider of The Phantom Punch trained by A. Oliver, reported to the Clerk of Scales that his mount hung left during this race.

* The Stewards enquired into an incident about two furlongs from the finish involving Maths Prize (GB), ridden by W.J. Lee, placed fifth, Jon Ess, ridden by K.J. Manning, unplaced, The Phantom Punch, ridden by W.M. Lordan, unplaced and Wexford Opera, ridden by R.P. Cleary, placed seventh, where it appeared that Jon Ess was tightened from both sides and checked. Evidence was heard from the riders concerned. Having viewed the recording of the race and considered the evidence, the Stewards were of the opinion that any interference that took place was accidental in nature and took no further action.