Happy days for D'ex at Downpatrick 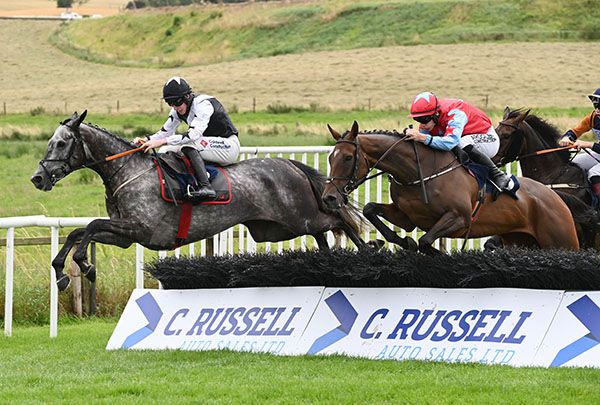 Happy D'ex got her career back on track in the opener at Downpatrick this afternoon, the Congratulating Mares Maiden Hurdle.

A winner of a point-to-point on debut when trained by Denis Murphy, she was subsequently sold for 195,000 pounds.

Successful on her first start for Gordon Elliott at Fairyhouse in November, the Saddler Maker grey had been ultimately disappointing since, slipping up when still in with a chance on her most recent start.

Sent off at 10/3 today, with Jack Kennedy aboard for the first time, she raced mainly in fifth, taking closer order from three out.

She got a dream run through on the inner approaching the final flight and soon led, keeping on well from there to score by three-and-a-half lengths. Bella Bliss (9/4), who wasn't fluent at the last, had to settle for second under Brian Hayes for John McConnell, while the front-running Will You Win (14/1) was a further 15-lengths back in third. Trendy Lady was sent off the 13/8 favourite and she finished a disappointing fourth.

"She's been a bit disappointing to be honest and she's one we're thinking of moving on in September," said Elliott.

"Jack said the fast gallop suited her well today and I'll have a chat now with the two Daves (of winning owners KTDA Racing) and see what they think, whether we keep her or move her on.

"It was a nice performance to get her head in front because she has been disappointing.

"She won a point-to-point and was recommended to us strongly. We won't mention any names but he knows who we are talking about!

"She's won a bumper and won a maiden hurdle and if every horse did that it would be great.

"I think she can build on that and the way she jumps she'll definitely jump a fence as well."

A.P. Kelly, rider of Some Say Theatre trained by Victor Wilson, reported to the Clerk of the Scales that his mount never travelled during this race.

The Irish Horseracing Regulatory Board Veterinary Officer examined Some Say Theatre, trained by Victor Wilson, at the request of the Stewards and reported the animal to be post race normal.