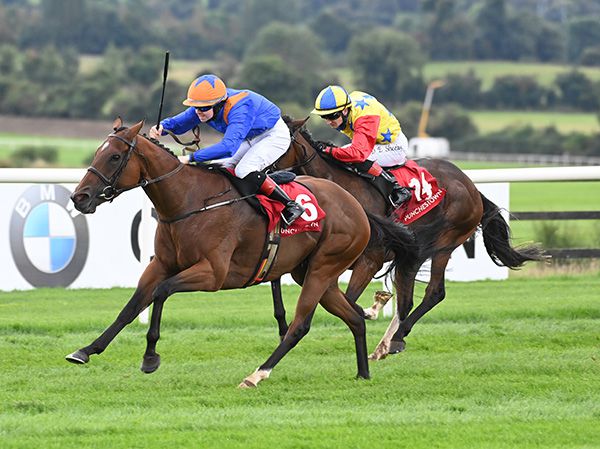 The consistent Miss Florentine got a second career win to her name, as she claimed the last at Punchestown, the second divide of the Irish Racing Working Together Handicap.

Trained by Ross O'Sullivan, the four-year-old made the breakthrough at Roscommon in June and filled the runner-up spot on two of her three starts since.

Sent off at 10/3 today, the daughter of Hallowed Crown was settled in mid-division by seven-pound claimer Robert Whearty.

She took closer order from halfway and was ridden to the front over a furlong from home, keeping on well from there to score by half a length.

French Company (10/1) ran a fine race to finish second under Danny Sheehy for Jimmy Coogan, while Sideshow Bob (15/2 to 4/1) was another length-and-a-half back in third.

Jazzelle was sent off the 16/5 favourite and she finished fifth.

O'Sullivan, who trains the winner for owner John Harney, said: "She's a lovely filly and she has improved so much from last year.

"She could have easily won four. She won in Roscommon and then got beat by a horse (Li Mu Bai) in Fairyhouse that has won again in Navan and had a right few pounds in hand.

“She just got beat on a bob at the line in Bellewstown and then has come here today and won.

"The man that owns her is a local man, John Harney, and he bred her as well. He's on cloud nine to have a winner in Punchestown and the family are all here as well.

"She's very tough and honest and it's great to have her. She'll go as far as she can until she reaches her peak and somewhere along the line she'll pull up at the end of the year.

"Her half-sister (Beat Of The Sea) jumps hurdles but I don't think this one will go jumping. We'll keep going with her as long as we can."

R.P. Cleary, rider of Sideshow Bob trained by Ms. Sheila Lavery, reported to the Clerk of Scales that his mount reared up on leaving the starting stalls.