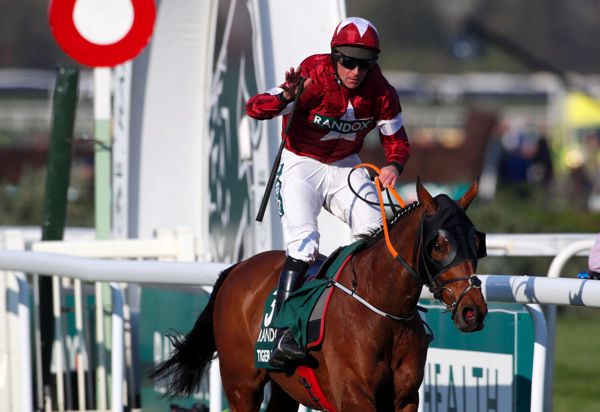 Coming to the last fence at Aintree, Hawke thought he was destined for the runner-up spot — only for the complexion of the race to change in his favour as he approached the Elbow.

Seagram hit the front 100 yards from the line, and went on to score by five lengths.

“I was jumping the last fence for second place,” he said.

“Garrison Savannah looked home and hosed — but he just didn’t quite get home.

“It was a great feeling 10 strides before we hit the Elbow, because I knew the race was won already.

“Seagram didn’t so much quicken. The horse in front stopped.”

Hawke knew Seagram’s forte was his jumping — and apart from a mistake at the 12th fence, he did not put a foot wrong.

“He was very good all way round, and I had great confidence in the horse. That was the most important thing,” he said.

“He wasn’t very big but he was a lovely jumper. He was neat and tidy. Apart from one mistake, he was very good all the way round.

“He was on the top of his form. He had just won the Ritz (Handicap Chase) at the Cheltenham Festival. He was a pleasure to ride that day — and even I couldn’t get it wrong!

“He ran a great race three weeks later when fourth in the Whitbread, but he was never the same horse after that.”

Hawke was forced to give up riding through injury in 1993, and became a trainer three years later.

Indirectly, he has been back in the Grand National limelight of late — thanks to Tiger Roll.

Hawke trained the dual Aintree winner briefly as a three-year-old, saddling him to make a winning debut over hurdles at Market Rasen until he changed hands and went to Gordon Elliott’s powerhouse stable in Ireland.

“It’s lovely and it sounds silly, but the connection with Tiger Roll has given me as much of a kick — it really has done,” said Hawke.

“I think he has done racing credit. He’s been very good for jump racing.

“They never bought him to win at four Festivals, and win two Nationals.

“He’s a total freak of nature. He wasn’t over big. Those type of horses usually get lost, because they can’t carry big weights in top races. He’s a law beyond all laws.”