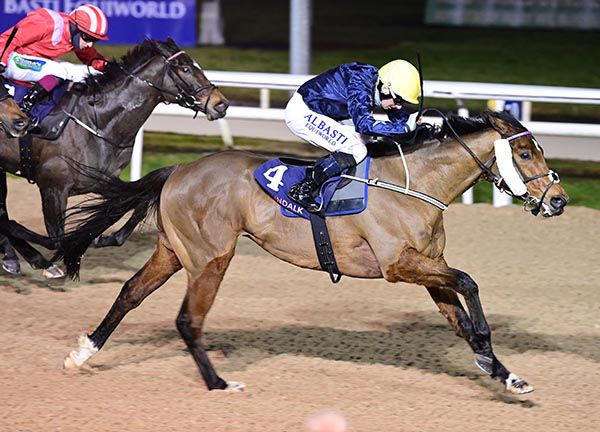 After his earlier wins aboard Doyouthinkso and Never Seen Before, Chris Hayes completed a 359/1 treble when partnering the 4/1 favourite Gatsby Cap to victory in the Find Us On Facebook @dundalkstadium Handicap (Div II).

The 5-year-old gelding by Gale Force Ten was never far off the pace and led inside the final furlong. Hayes didn’t have to get overly serious with his mount to win by a length and a half from Sister Lola (15/2) with Alice Milligan (5/1) another neck back in third.

Twice a winner for Fozzy Stack as a 3-year-old, including a victory at this venue, Gatsby Cap was having his second outing for current trainer Paddy Hayes, brother of the winning jockey.

Based on the Curragh, the winning trainer Paddy Hayes commented: “We got him from Fozzy Stack for a syndicate last September as Chris recommended him and we gave him a bit of a break.

“The tongue tie has helped as he plays a lot with his tongue. He’s after doing it well there and hopefully there is another day in him.

“A lot of it is down to Chris. He’s a big help to me the last couple of months coming in to ride out and only for him I’d be lost really.

“I have about six in at the moment and we have a few nice horses for the summer. I do a lot of pretraining and breaking for the likes of Mrs Harrington.”