Hayes doubles up on well-backed Franklyn 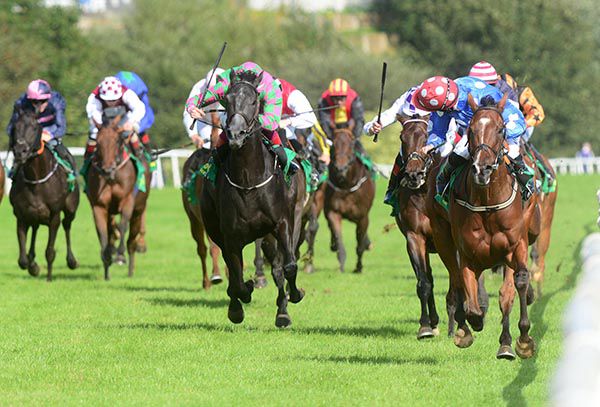 Franklyn made it three wins from his last four starts when making all under Chris Hayes to land the Seamus Mulvaney Bookmakers Handicap at Listowel.

The Aidan Howard-trained gelding won at Killarney and Leopardstown in July and, after finishing third when upped to a mile and a half at Roscommon last week, appreciated this step back to nine furlongs.

The well-backed 7/4 favourite, available at 9/2 earlier in the day, asserted over a furlong out and kept on well to beat Vocatus by four and a quarter lengths with Ideal Pal half a length further back in third.

Hayes was completing a double on the day having been on the mark earlier aboard Shekhem in the juvenile maiden.

Howard said, “It wasn’t the plan to make it. I was hoping to get a bit of cover but he bounced out and Chris said he loved it and handled the soft as well.

“The last day he was too fresh and keen and didn’t get home. He is a keen horse but today he settled great. They went very steady the last day and it was a bit too far.

“The lads at home have done a great job as he is a bit kinky.”

The Curragh trainer may bid for a quick follow up with the son of Archipenko saying, “He’s in again tomorrow and we’ll see how he is. He didn’t seem to have too hard a race there. Simon (Torrens) rides him out every day and deserves a go on him.”