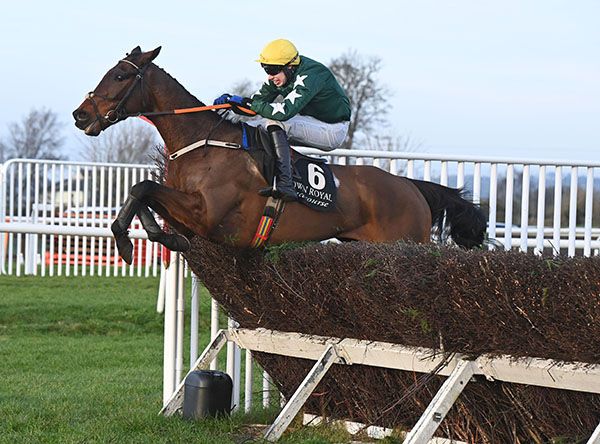 Condon partnered Paul Hennessy's Heaven Help Us to win the Coral Cup in March and The Mean Queen to win the American Grand National last summer but fracturing vertabrae in a fall three months ago and returned with one unplaced ride at Thurles on Thursday.

Winning trainer Fahy later revealed “he comes from the family of Height Of Fashion (runner-up to Arkle in the 1964 Irish Grand National) and I was trying to sell him one time and told everybody about this, but they wouldn't listen.

“I said 'I'll win the Irish National - we won't have Arkle to beat!' but they were laughing at me. It's very much on the cards now as needs a trip and if it was another mile. he'd just be coming into it.

“He jumps a bit to the right but he is a lovely horse and I'm delighted with that.”

History Of Fashion's win came, appropriately, half an hour after the Dreaper family's Mr Bercow's win in a handicap chase.

Final another front-running success at Roscommon

Front-runners made hay at Roscommon tonight and Final Endeavour was another to make all for victory in the finale at the midlands track.

Rosscarbery landed her hat-trick in fine style at Roscommon this evening as jockey Billy Lee also recorded a treble on the night.

The Paddy Twomey-trained Spasiba galloped on strongly in the closing stages to run out a cosy winner of the ten furlong maiden at Roscommon.