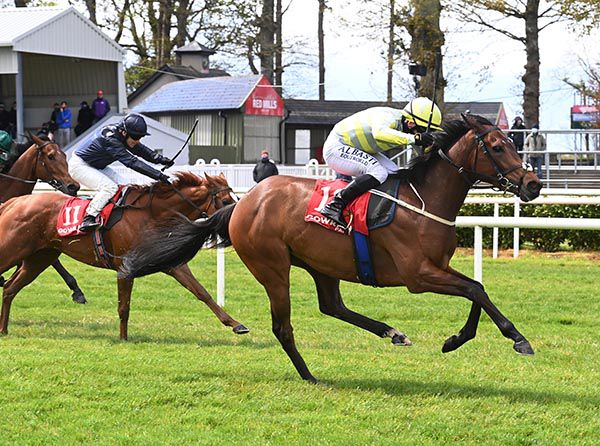 Holly Golightly saw off the market leaders from the front in Gowran Park's fillies' maiden.

Gary Carroll got away smartly from stall 13 to grab an early lead in this race over a mile on soft ground. She was soon tracked by the 11/10 favourite New York Angel with Friendly tucked in behind in third.

As the field turned for home, Holly Golightly came down the centre of the track while the pursuing New York Angel and Friendly tacked over to the stands' side.

The 14/1 shot looked be vulnerable approaching the final furlong but found plenty for pressure to pass the post a length and three parts to the good.

Friendly kept on for second at 3/1 and was half a length in front of New York Angel.

The market had the winner as Ger Lyons' second-string as Colin Keane's mount Spilt Passion went off at 5/2 and finished fourth.

Assistant trainer Shane Lyons said: “That's a great result. She'll get further and Gary said she's still very green so there is improvement to come from her mentally.

“At the top there, where its always the deepest, she flattened out on him so she'll improve for better ground as well.

“She's very green and baulked at the road past the winning post.

“Trevor (Stewart, owner) has been with us for years, he bred her and Cassandra Go was a very good horse so she's all about pedigree.

“After winning there now, she's an exciting prospect.”

She had finished fifth and third in a couple of maidens on the Polytrack at Dundalk in November and March respectively.

Misty's Gift tough in the finale

Misty's Gift and Jamie Codd took the honours in the bumper at Cork with a two-length victory.

Strong-travelling Magic Chegaga won a competitive looking nightcap in Naas by a length and three parts.

Go Another One keeps delivering for McConnell

Go Another One (9/4) warmed to his task off the front as he retained the three-mile hurdle in Cork.

Sweet Sixteen added to a win at Tramore back in April when taking the Kanturk Handicap Hurdle in good style at Cork.