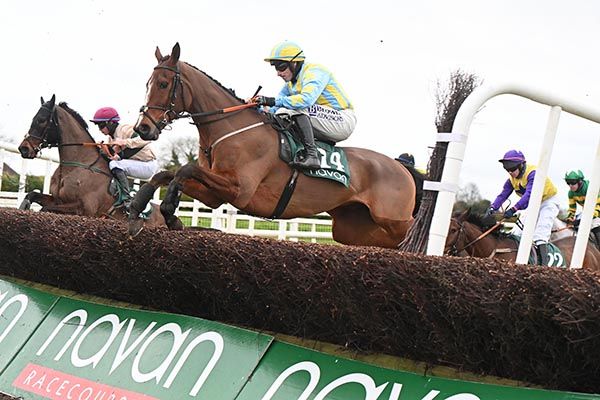 Handicap 'good thing' Routine Excellence (5/6) delivered in the 22-runner Gormanlough Handicap Chase, but not before giving his connections and backers a mighty scare at Navan.

Sean Flanagan tracked the leaders on the inner on Routine Excellence, but Gavin Cromwell’s charge blundered badly at the eleventh.

However the point-to-point and Naas maiden hurdle scorer made headway into third travelling well three out. He disputed the lead at the next, and was pushed along to lead before the last. From there Routine Excellence stayed on well on the run-in, eased close home to easily defeat Four Country Roads by five and a half lengths.

“It looked to be a fair mistake but he didn't lose a terrible lot of ground. I was standing at the last watching it on my phone,” said Cromwell.

“He looked well handicapped on his hurdles form and ultimately he was.

“He's in on Tuesday at Down Royal but he might not get in as he's number eight in the ballot. If he comes out of that okay and he gets in he might run. I'm not sure, we'll see what the handicapper does.”

D. Meyler, rider of Wanchu Bach trained by Kieran Purcell, reported to the Clerk of the Scales that his mount was pulled up having lost his action.

P.J. O'Hanlon, rider of Walking The Walk trained by P.J. Rothwell, reported to the Clerk of the Scales that his mount hung left in the straight.