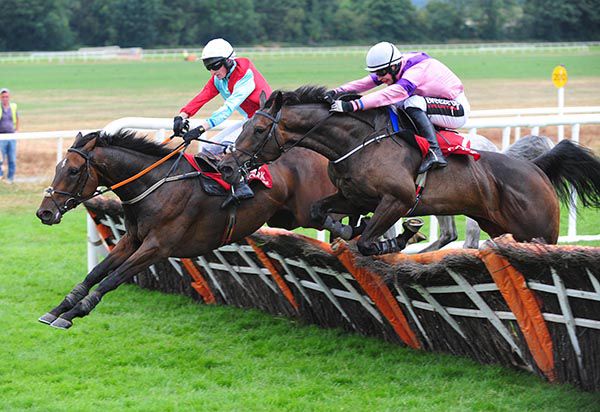 Ninth on his debut at Tipperary last week, the Joseph O'Brien trained five-year-old proved easy to back, and went off at 20/1 having opened on-course at 16s.

Settled in mid-division by JJ Slevin, the son of Stowaway was ninth with a circuit to race. He was closer in sixth from four out, and was pushed along to challenge on the outer approaching the second last.

The bay victor wasn't fluent at the last and was ridden on the run-in, staying on best to lead close home, getting the better of Bensachuine by a length.

The Denis Hogan trained and ridden runner-up was backed from 5s into 7/2 on-course, with the front-running Cesar Du Gouet another two and a quarter lengths back in third at 40/1.

The front thee went eight lengths clear of the 8/11 favourite Turbo in fourth.

Slevin said afterwards: "His jumping was very good apart from the last. He's a fine big stamp of a horse and I'm sure he'll jump a fence some day.

"He lost plenty momentum at the last when he got right under it and did well to get back up."

The Stewards ordered the withdrawal of That'sthatdev, trained by P.C.O'Connor, for failing to lodge the passport in accordance with the provisions of Rule 90 (i).

The Irish Horseracing Regulatory Board Veterinary Officer examined Glamorous Gold, trained by N.Stokes, at the request of the Stewards and reported the animal to be stiff behind and showing signs of being in season. Samples were also taken analysis.

C.A. Landers, rider of Viempa trained by W.J. Martin, reported to the Clerk of Scales that his mount made mistakes at the first two hurdle.

A. Ring, rider of Make It Up (GB) trained by Denis Gerard Hogan, reported to the Clerk of Scales that his mount was lame after pulling up.

The Stewards enquired into the running and riding of Glamorous Gold, ridden by P.E. Corbett, and trained by N.Stokes. Evidence was heard from the rider and trainer concerned. P.E. Corbett, stated that his instructions were to drop in, get his mount settled and do the best he could. He said his mount missed the first and ran green before staying on at one pace in the closing stages, under a hands and heels ride. He added that his mount may appreciate a longer trip in future. N.Stokes, confirmed the instructions given and expressed his satisfaction with the ride. He described his charge as a difficult ride and was also of the opinion that she ran green in stages and missed a hurdle down the back causing her to loose momentum. He further added his charge appeared to appreciate today's better ground conditions. The Stewards also received a report from the Irish Horseracing Regulatory Board Veterinary Officer, who stated that Glamorous Gold was stiff behind and showing signs of being in season. Samples were also taken for analysis. Having viewed the recording of the race and considered the evidence, the Stewards noted the explanations.