Hyde's on the mark with Stacey Sue 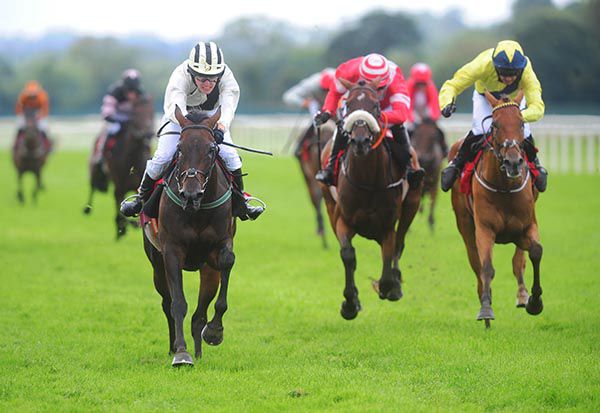 Stacey Sue provided sixteen-year-old Tim Hyde with his second success in the saddle, as she took the last at Cork, the Ticket Sales Online @corkracecourse.ie INH Flat Race.

Trained by his grandfather of the same name, Hyde, who attends Glenstal Abbey School, recorded his first success on Feelin' Groovy at Limerick in March.

Stacey Sue, who won a point-to-point at Stradbally in April, was sent to post a 14/1 chance, and was settled behind the leaders.

She was pushed along to challenge from two furlongs out, and got to the front inside the final furlong, going on to score by half a length.

She'stherightone (25/1) finished second under Richie Deegan for Denis Cullen, while Clever As A Fox (10/1) was another length back in third.

Buck's Billionaire was sent off the the well-backed 8/13 favourite (from 11/10), and he finished fifth under Patrick Mullins for his father Willie.

The winner's grandam, One Run, is the dam of Theatre Run who earlier won the fifth race on the card.

The Stewards enquired into an incident turning for home involving Bobsfirth, ridden by Mr D. O'Connor and Buck's Billionaire (FR), ridden by Mr P.W. Mullins, where Bobsfirth fell on the flat. Evidence was heard from the riders concerned. Having viewed the recording of the incident and considered the evidence, the Stewards were unable to apportion blame and took no further action.