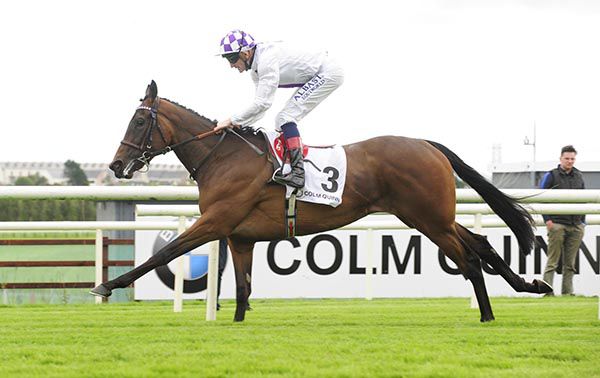 Meala was the most experienced horse in the fillies' maiden at Galway and she put that knowledge to good use with an impressive performance.

On her fourth start, Kevin Manning soon positioned her in third behind Sweet Molly Malone and Umneyaat.

Manning asked her for more rounding the home turn and the 11/4 joint favourite readily swept around her rivals and moved clear entering the straight.

She powered away in the final furlong to rout the opposition by 11 lengths.

Umneyaat (4/1) took second by a head from the other 11/4 joint favourite Oh So Fine.

"She's a filly that stays well and she travelled very well in behind. We went a nice even pace but when I moved her out and asked her to quicken she did it in a few strides. She was very impressive," said Kevin Manning.

"I would imagine so (go for the Group 2 Debutante Stakes). I was surprised she was still a maiden at this point.

"Great attitude and very switched off and has a nice turn of foot."

"She'll get a mile and next year will be her year."

Meala has improved with each run - on debut she was fourth in Navan (behind Frenetic), then she finished third and second respectively on her next couple of starts in Leopardstown.

Pre-Galway action is at Gowran this afternoon where the ground is good and another warm and dry day is expected.