In-foal Miss Jabeam sees out the mile well under Crosse 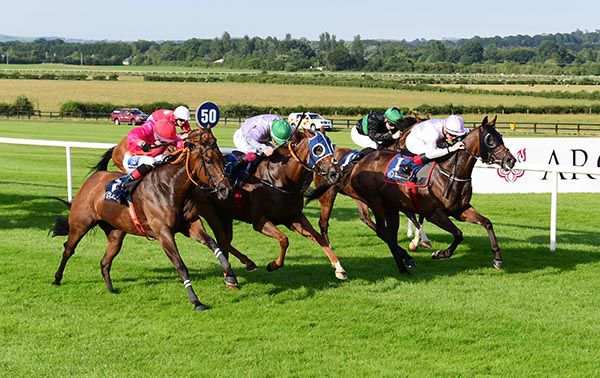 The 10/3 favourite Miss Jabeam registered her fourth career victory when getting up close home to win the first division of the O'Neill & Co. Chartered Surveyors & Auctioneers Apprentice Handicap.

Three times a winner over sprint distances earlier in her career, the 5-year-old was a staying-on fourth over a mile at Killarney last week and responded well to Nathan Crosse’s urgings on the final climb here to touch off Scream (17/2) and Oh Purple Reign (13/2) by a head and a short head.

It was a 13th winner of the campaign for Crosse, eight behind his brother Shane who has ridden 21 so far this year including Pretty Polly heroine Thundering Nights.

Winning trainer Aidan Howard said: “I'm absolutely delighted for the owners as they have stuck with her.

“She's had her little problems but they put her in foal (to Gustav Klimt) earlier in the season and it has helped as she's good and sweet.

“They guys in the yard have done a great job with her.

“She's entered at the weekend but I don't think we'll go. It's a very hot day and I think she's had a hard race.

“She has the guts of a month left so hopefully we'll go again with her in a couple of weeks.”