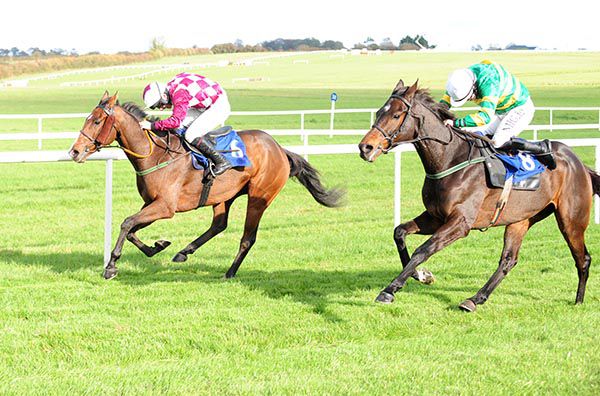 The www.thurlesraces.ie Handicap Chase was full of incident and Stylish Moment (10/1) ultimately got it done for in-form pair Eoin Doyle and Phillip Enright.

Three out was bypassed here as Lean And Keen had taken a heavy fall on the previous circuit under David Mullins. Mullins was being attended to when the runners came around again.

Before the straight then and Stylish Moment slipped up the inner of favourite Everlastingpromise to lay down the challenge.

The latter seemed to have warded off the danger when not fluent at the last, leaving Stylish Moment back in.

In the end Stylish Moment edged out Everlastingpromise by a neck.

Thankfully Simon Torrens and Captain Cobajay were okay after a horrible spill at the last.

"He is a grand oul horse and he won well the last day and we thought he'd come on a bit," said Doyle.

"Everlastingpromise (runner-up) missed the last and we winged it and it was probably the winning of the race and he is probably a galloper and Philip said he'd use him up turning in instead of getting caught for toe, so he gave him a great ride and that's his third winner for us in the last ten days.

"It was his first run in a handicap chase and he is rated 104 over hurdles so that's something we'd have to look at. He wouldn't want really deep ground but likes it yielding or soft."

M.P. Walsh, rider of Artic Pearl (GB) trained by Martin Brassil, reported to the Clerk of Scales that his mount hung badly to the right.

The going at Sligo ahead of racing today and tomorrow is good, good to yielding in places on the flat track and good on the hurdles, bumper course.

Karl Thornton is looking forward to a tilt at the Sky Bet Ebor Handicap with his stable star Shanroe.

Rotten Row forges on for Hamilton

Rotten Row, a son of St Leger winner Leading Light, made a winning debut in the concluding bumper at Roscommon.