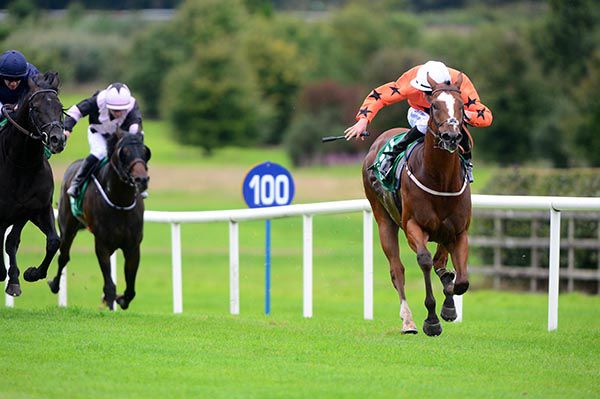 His jumping star Sam Spinner runs in orange silks, but not the same ones as Sean Davis carried to success for trainer Jedd O'Keeffe in the Troytown Bar Handicap at Navan on Only Spoofing.

Brought over from Yorkshire by O'Keeffe, but running for Irish owners, the Mannions, 11/2 shot Only Spoofing upstaged Amanaat by a length in this sprint.

"I got the ride on him in the Rockingham and he ran a real good race," said Davis.

"I went over to England, to Ascot, to ride him and was confident he'd put up a good performance but I don't know what happened him that day, he just disappointed a shade.

"Coming back here I was plenty confident with him and so were the owners and the trainer.

"The leader got tired and came across to meet me at the railing. I was getting left in a bit of a pocket but thankfully I had a game horse to help me get out of it.

"I was just trying to get a gap without causing too much interference."

S.P. Davis, rider of Only Spoofing trained by Jedd O'Keeffe (in GB), reported to the Clerk of Scales that his mount was short of room when challenging.

A.J. Slattery, rider of Sors trained by Andrew Slattery, reported to the Clerk of Scales that his mount got a small bump inside the last half furlong.