It all goes right for Everlastingpromise at Thurles this time 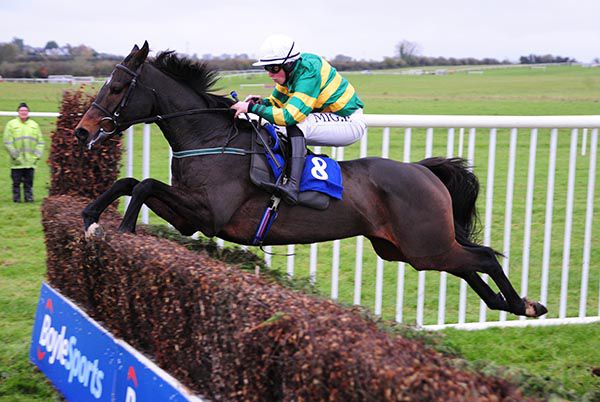 Two false starts and an off time four minutes behind schedule were only minor details for connections and supporters of Everlastingpromise after the favourite smoothly landed the Littleton Handicap Chase at Thurles.

It was looking good from some way out for backers of the 5/4 shot (from 7/4) and he avoided the late error that proved so costly when he was defeated here on October 24th.

From the front Donie McInerney’s mount got it done by six lengths and a neck from Great Khan and Cusp Of Carabelli.

There’s likely plenty more to come from Everlastingpromise as he’s a mere five-year-old. Enda Bolger has care of him for J P McManus.

Bolger said afterwards: "My concern was about the ground but I couldn't believe it was so good and he has the action of a real daisy cutter.

"He was unfortunate here the last day and could now have won three in a row. There is a chance he could now run in a cross-country race at Punchestown on Sunday week, otherwise he could run at Leopardstown over Christmas."

T. Ryan, rider of Chief Of Panama trained by Liam P Cusack, reported to the Clerk of Scales that his mount was badly hampered at the second.

The Irish Horseracing Regulatory Board Veterinary Officer reported to the Stewards that Rebel Turn trained by W.J. Burke was found to have blood at both nostrils post race, possibly as a result of a fall.

The going at Sligo ahead of racing today and tomorrow is good, good to yielding in places on the flat track and good on the hurdles, bumper course.

Karl Thornton is looking forward to a tilt at the Sky Bet Ebor Handicap with his stable star Shanroe.

Rotten Row forges on for Hamilton

Rotten Row, a son of St Leger winner Leading Light, made a winning debut in the concluding bumper at Roscommon.