Joseph O'Brien puts 377/1 Limerick treble on the board 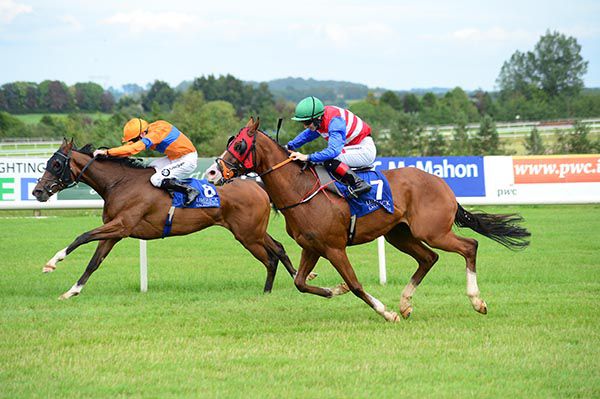 Following on from Syrena and Fancy Footings earlier, Jumellea (20/1) brought up a treble for Joseph O’Brien at Limerick in the Racing Again Next Saturday Handicap.

O’Brien’s brother Donnacha rode Syrena and Fancy Footings but it was Declan McDonogh that took the reins on the lightly-weighted Jumellea.

Donnacha this time was on eventual sixth home, Shadow Seven. Up front Jumellea wasn’t to be defeated in first-time blinkers though.

Bred by Aidan and Annmarie O’Brien, and her father Joe Crowley, the successful Zoffany filly here got the better of One Cool Poet by a head, with four and a half lengths back to odds-on favourite Building Bridges in third.

Jumellea is owned by Mrs O’Brien and after this win stable representative Brendan Powell said: "She's very tough and hardy.

"She's continued to step up in trip and will probably stay further again.

"Declan (McDonogh) said she'd win again and somewhere like the hill at Galway could suit her, although I don't know if there's anything there for her and that will be up to Joseph.

"She's very genuine but I think the blinkers just made her switch on a bit."

T.P. Madden, rider of Hurricane Sky trained by Charles O'Brien, reported to the Clerk of Scales that his mount reared leaving the stalls.