Joshua boxes on to land the claimer 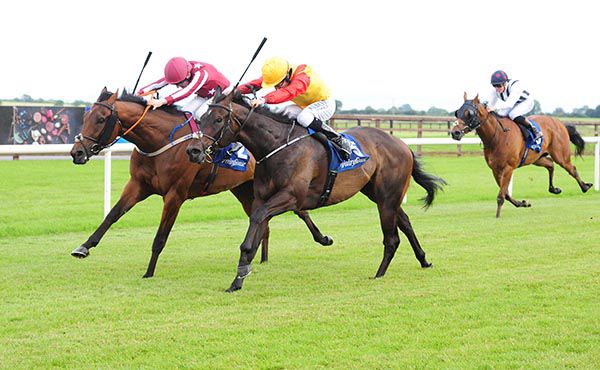 There was a thrilling finish to the opening claiming race at Fairyhouse as the well-supported second favourite Nobel Joshua just held on from the fast-finishing market leader Bar Room Bore.

Chris Hayes’ mount hit the front well inside the final furlong, after But I LikeI It had tried to kick on early in the straight, but was all out as Bar Room bore responded to strong handling from Shane Foley. Denis Hogan’s charge gained the verdict by a nose, with four lengths back to the third home But I Like It.

“That was grand. I spoke to Denis on the way up and he just told me to keep it simple,” said Hayes.

“I thought going back to his first handicap run in England he'd have to have a squeak at the weights.

“They went pretty quick and I got there sooner than ideal but he put his head down when it mattered.

“I actually have a good strike rate for Denis, he just doesn't use me enough!"

There were several successful claims after this race.

The winner Nobel Joshua was claimed by Mrs Caroline Fitzpatrick and will join trainer Denise Foster.

The second and third home,Bar Room Bore and But I like It, were both claimed by Miss Fiona Nolan and will join trainer Fergal Birrane.