Keane strikes back with Steph 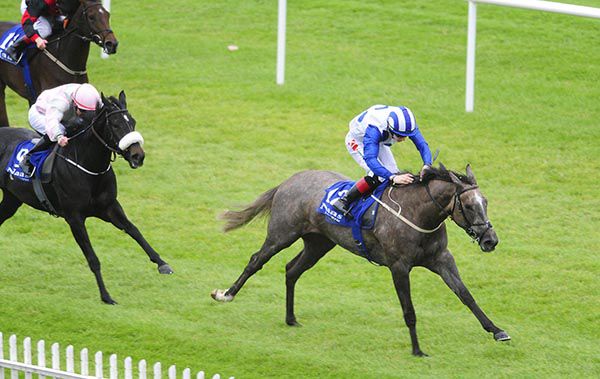 Colin Keane moved back five in front in the title race when Who's Steph powered clear inside the final furlong to claim the mile fillies maiden at Naas.

11/8 favourite Minnie Haha was produced to lead a furlong-and-a-half from home but drifted right under pressure.

She was claimed by the Ger Lyons-trained Who's Steph inside the final furlong and the well-backed 2/1 shot (11/2 this morning) asserted close home for a three length success.

The winner had finished mid-division on her debut in a strong looking Leopardstown maiden on champions weekend.

Shane Lyons said afterwards:- "Lovely filly but she's clueless and very green. She did improve for her run in a lovely maiden at Leopardstown but it was only the last 100 yards there that she put her head down and settled it fairly quick.

"She'll get a mile and two next year no problem. We have her in the Listed (Staffordstown Stud Stakes) race at Navan on Sunday. We'll just see how she comes out of the race and it could be an option, or we could wait and let her grow up over the winter and try and get black type next year.

"She is a filly we like and she has been going the right way since her first run. She will improve a lot again from that."