Knockanarrigan enjoys his spin over hurdles 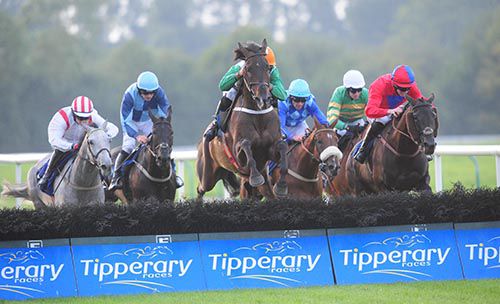 Knockanarrigan, centre, jumps the last on his way to victory
© Photo Healy Racing

Knockanarrigan (5/1) proved too strong at the end of the three mile handicap hurdle in Tipperary as he saw off Colette's Choice.

Jack Kennedy sent Colette's Choice into the lead after the fourth last but Knockanarrigan was going noticeably well as he moved into contention after the penultimate hurdle.

He was soon shaken up by Conor Brassil and led narrowly coming to the last. On the run-in, he kept on best to close out the race by half a length from the 50/1 shot Colette's Choice.

El Vasco (7/1) passed the post in third, beaten three and a half lengths by the winner.

“He was probably well handicapped over hurdles on what he has done over fences and we always thought there was a hurdle race in him.

“He has a good high cruising speed and needs to come with one run. He held on to him which suited and Conor gave him a very good ride.

“He'll go back over fences and we'll look for something on good ground. He's a nice one to have.”