Kruzhlinin puts a smile back on all at Cullentra House 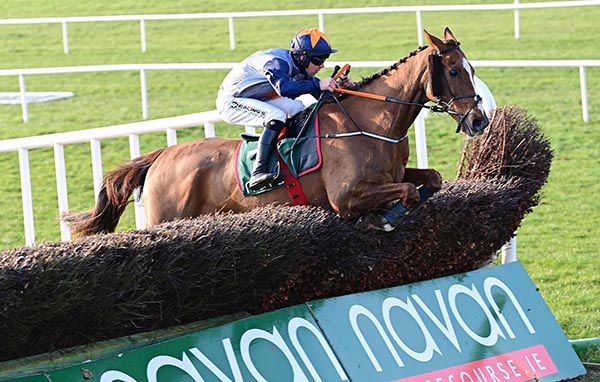 On what has been a tough week to say the least for Cullentra House Stables, Kruzhlinin put a smile back on everyone at the yard when turning back the years to land the Navan Members Veterans Handicap Chase.

The 14-year-old gelding is firmly in the veteran category and having won 13 times in point-to-points made it nine wins under rules in the colours of Camilla Sharples — travelling head girl for trainer Gordon Elliott.

Winning rider Jordan Gainford, who is not that much older than Kruzhlinin, has really burst onto the scene in recent weeks and he had an armchair ride here as the 12/1 chance cruised clear from before the last to score by an impressive eight and a half lengths from Wishmoor.

An emotional Sharples said afterwards, “He means the world to me. I’m very lucky to have him and I’m very lucky that Gordon trains him for me. He’s just an absolute superstar and owes me nothing.

“My thoughts today were if he came home in one piece I’d be delighted. He was fit and well at home so we said we’d run him today and I just can’t believe it.

“I looked after him as a five-year-old when I worked for Donald McCain, and when I left I wrote Paul and Clare Rooney a letter and said if they ever wanted a home for life for him that I’d take him. They were really good and let him run in my colours.

"We call him Kevin at home. I couldn't pronounce his name when I first looked after him in Donald McCain's yard so we called him Kevin.

“I just can’t thank Gordon enough training him. He lets me take him to the beach and do cross country - some variety for an older horse.

“We’ve had a really tough week and I’m just delighted for the whole team. We’ve all stuck together and it’s days like this that we dream of.

“We’re not sure when point-to-points are going to be back. He was flying at home so Gordon chose this race for him and it’s unbelievable to win it.

“He wore cheek pieces for the first time today and he was almost running away with Jordan.”