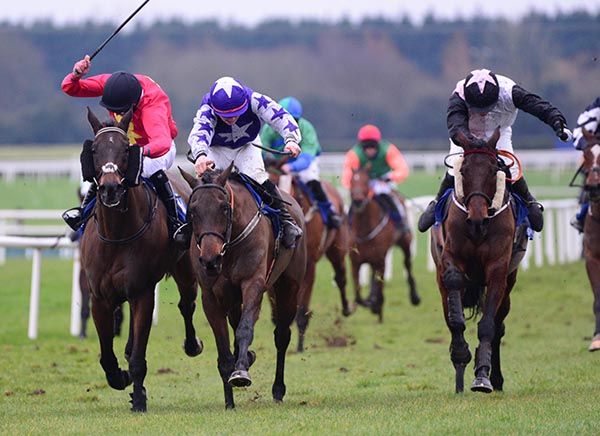 School Lane swooped on the run-in to prevail in a cracking finish to the two-mile-five handicap chase at Fairyhouse this afternoon.

Liam Lennon's in-form gelding was recording his second 'track' success to add to a couple of point-to-point wins gained in November.

Sam Ewing had partnered his first jumps winner on the Winged Love gelding at Down Royal on St Stephen's Day and was back in the plate this afternoon.

The pair claimed front-runner Spare Brakes on the run-in but had to pull out all the stops in the closing stages as the long-time leader rallied.

Conquredalofeurope also ran on to press the leaders and eventually got up for second as School Lane secured a half length win at odds of 6/1. Spare Brakes was a neck back in third.

Lennon said:- “He seems to be improving. My horses were sick last year.

“Being by Winged Love, they do take time. He seems to have turned a corner and Sam gave him a lovely ride.

“Hopefully that can get him into the Ulster National. He was second in it a few years ago (2019).”