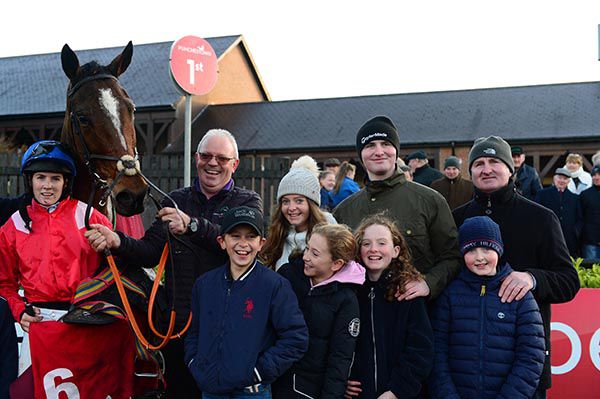 De Bromhead and Blackmore were narrowly beaten in today's featured Grade 2 Sky Bet Moscow Flyer Novice Hurdle with free-going runner-up Captain Guinness but did leave with a winner on the card as well-bred Le Musigny defied a 603 days absence to win on racecourse debut.

The French bred son of Anzillero is from a high-class French family and is a half-brother to Grade 1 winners Le Richebourg and Grands Crus and was unsuccessful for previous handler Colin Bowe in two point-to-points in April and May 2018.

The six year old was a race-day non-runner twice in 2019, firstly in a Kilbeggan bumper in June (due to a stone bruise) and again at Leopardstown on St Stephens Day (due to a vaccination error).

Today Le Musigny, backed from 14/1 to 12/1 on track, scored a half-length win over The Broghie Man and afterwards De Bromhead reported “he’s a horse we’ve always liked and always worked like a good horse but he’s just taken a bit of time.

“He’s a big fella and is a half-brother to Le Richebourg and Grands Crus so he has a savage pedigree.

“We said to Rachael to give him time and let him settle and see how you go. It worked out well as they went a good gallop and got a bit tired near the end.

“She said he was still a bit green when he hit the front and should improve plenty. Whatever he does over hurdles, fences should be his game.

“He’ll go for a novice and we’ll take it from there.”