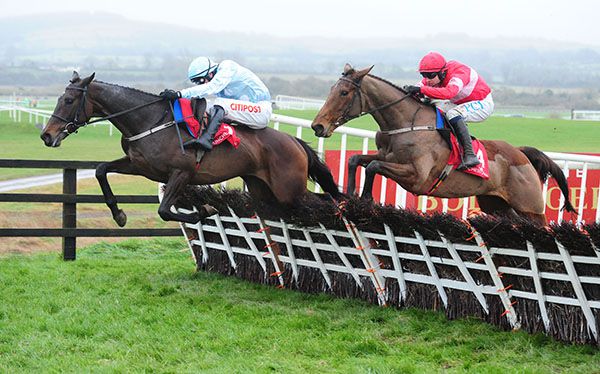 The Grade Three Quevega Mares Hurdle at Punchestown appropriately saw the trainer of the great mare commemorated in the title, Willie Mullins, saddle a one three as Elfile (9/4 into 6/4) led them home.

Mullins’ nephew Danny was aboard Elfile, with stable jockey Paul Townend on Laurina (11/10 out to 11/8 favourite).

Attempting to put two non completions over fences behind her, Laurina had every chance in the straight as the always prominent Elfile went for home.

Laurina ultimately had no extra to give on the run-in and Black Tears came through for the second spot, two and a half lengths off the winner. Laurina ended up three parts of a length back in third.

Paddy Power go 12/1 from 16/1 about Elfile for the Close Brothers Mares’ Hurdle.

“That was a good performance by the winner and will probably book her ticket for the Mares Hurdle. I’d like to go there and I don’t think there is any other race for her in Cheltenham," said Mullins.

“She’s improving and probably has a future over fences next season. A longer trip would be better for her.

“I was happy enough that Laurina at least ran a race today. Her training schedule has been very hit and miss and this race was an afterthought to see how she would handle going back over hurdles.

“She might be better staying over hurdles but I’ll have to have a chat with connections.

“Paul was very happy with her for a long way today. It’s obviously a long way below her best but at least she didn’t pull up like her last two runs over fences and we can use her preparation as an excuse.”

The Irish Horseracing Regulatory Board Veterinary Officer examined Laurina (FR), trained by W.P. Mullins, at the request of the Stewards and reported the animal to be post race normal.