Leanne Breen not long about striking with Ahundrednotout 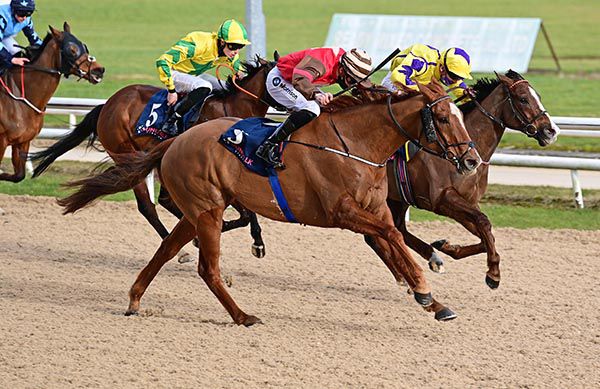 On his second start for Leanne Breen Ahundrednotout (16/1 — 25/1 - 11/1) took his career tally to four wins in the Join Us On Instagram @dundalk_stadium Handicap.

In a race that was marred by Tynamite going wrong about a furlong and a half out, pace-setter Pillar had to settle for third after being upstaged by the always prominent Annabelle Rock in the final furlong.

That Natalia Lupini mare couldn’t ward off Ahundrednotout (Shane Crosse up) as he ultimately got there by a neck.

Alice Milligan and The Cola Kid then caught the eye in fourth and fifth.

“That's his second run for me and he's been taking a lot of work just to get him firing again as he had a break,” said the winning trainer, based in County Down.

“The six furlongs here was perfect for him and Shane gave him a lovely patient ride.

“Hopefully he can improve from that as it was only his second run back. He was drawn 15 there so even if he got a few pounds and an inside draw he might pick up another one.

“He's freshened up now. He's getting on in age but he still has the right attitude for it.”

O.J. Orr, rider of Tynamite trained by David Marnane, reported to the Clerk of Scales that his mount lost its action.

The Irish Horseracing Regulatory Board Veterinary Officer examined Tynamite, trained by David Marnane, at the request of the Stewards and reported the animal to be lame on its right hind post race.

D.E. Sheehy, rider of Ossco (GB) trained by Anthony McCann, reported to the Clerk of Scales that his mount was slowly away.

D.P. McDonogh, rider of Wishbone trained by J.J.Lambe, reported to the Clerk of Scales that his mount missed the break and was hampered after about a hundred yards and was then also badly hampered by the horse that pulled up. Having viewed a recording of the race with D. P. McDonogh the Stewards were satisfied that no further action was warranted.

The Stewards requested a report from Leanne Breen, trainer, as to the apparent improvement in form of Ahundrednotout (GB), placed first, as compared with its recent form. Leanne Breen stated that she only acquired the animal in December 2020 and on its first run for her where it was returning from a lay off it had run well until about two furlongs from home and in her opinion had improved for the run. She added that the application of cheekpieces today, to help it concentrate, coupled with the outside draw, which meant that he was not crowded early on, may have helped to bring about the apparent improvement in form. Having considered the evidence the Stewards noted the explanation given.

After finishing second at Dundalk on Friday, ultra-consistent sprinter No Speed Limit maintained his remarkably reliable level of performance when runner-up at Southwell this afternoon.

Chantry House aiming to bounce back in Cotswold Chase

Chantry House will bid to get back on track in the Paddy Power Cotswold Chase at Cheltenham on Saturday after a below-par effort in the King George VI Chase.