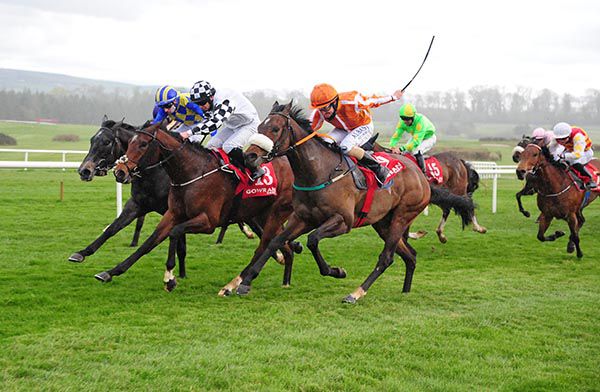 The Ciaran Murphy-trained Lust For Life emerged on top after a thrilling three-way finish in the Good Enuf To Eat Catering Handicap at Gowran Park.

Ellabella took them along in the seven-furlong heat but was swamped inside the final furlong as a trio of horses came to fight it out.

Aingeal Dorcha, Benkogambit and Lust For Life all had every chance in the closing stages with the later just getting the verdict at the line by a head.

Aingeal Dorcha took the runner-up spot, a short-head ahead of Benkogambit.

The winner, a 12/1 shot, was making her handicap debut on her seasonal return. It was a second winner in a row for Slade Power, also the sire of Sister Lola.

Murphy said:- “She was working well as a two-year-old but was getting too big and we just said we’d run her for the experience.

“She ran real well in the Ballyhane race at Naas (finished 12th) but was a big weak filly.

“She’d have needed the run today but obviously she’s on a nice mark and just got the job done. Shane was very good on her.”