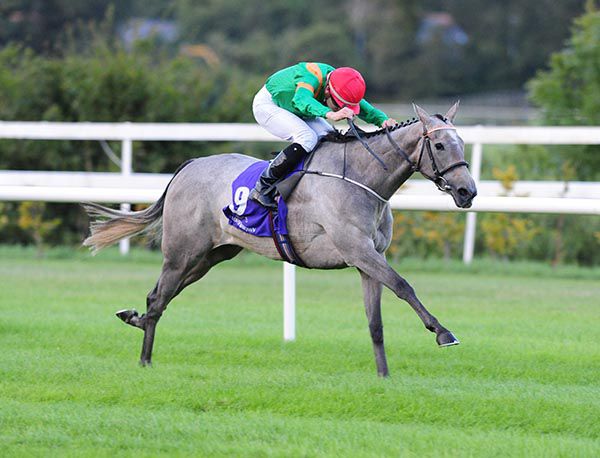 Following the dazzling debut of his uncle Kevin's Madhmoon in race three, Patrick Prendergast struck in the finale at Leopardstown with a nice newcomer of his own, Ballylinch Stud's Moteo (12/1) doing the business in the Irish Stallion Farms EBF (Fillies) Maiden.

Ronan Whelan may have been sporting the second silks of the County Kilkenny farm on this grey, as Gray Carroll donned the usual orange cap white star aboard Eddie Lynam's second time out Dream World (also a 12/1 chance).

She ended up in eight position at the death, as up front Moteo asserted away inside the final furlong to defeat Ciao by three and a quarter lengths.

Bidding to supply Jessica Harrington and Colm O'Donoghue with a treble, 5/4 favourite Minnie Haha didn't live up to her billing in ninth place.

"It was pure jealousy on my part. I couldn't let Kevin have the spotlight!" quipped Prendergast.

He added: "It's a good day for the family. I like this filly and there's huge improvement in her.

"Pat Shanahan rode her work, he's never lost it, and said to me 'she won't be far off the first day she runs'. I said 'Pat she'll need a run' but he said she wouldn't be far off.

"I honestly thought she'd run very well but I didn't envisage her winning a maiden first time out because we haven't done a whole lot with her. She hasn't been with us very long.

"Ronan says she's perfectly capable of black-type when she knows her job so I hope he's right. Time will tell.

"I'm a little bit stumped. I'm never too upset if they are beaten first time out but I'm impressed the way she did it and liked the way she pricked her ears afterwards.

"Her dam Modeeroch loved it here."

S. Foley, rider of Intermedia trained by M.Halford, reported to the Clerk of Scales that his mount was slowly away out of stalls and never travelled thereafter.