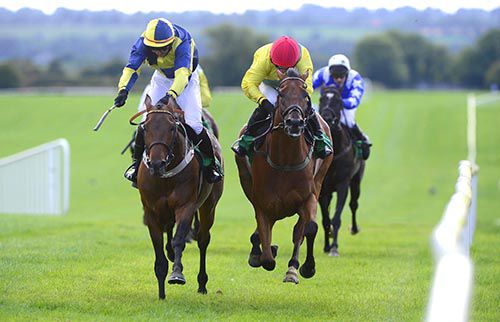 James Dowling on Little Haarth won a protracted battle with Katie Walsh on Swansea Mile to win Navan’s bumper by a nose at 12/1.

Steel Wave took the seven-runner field along but was picked off at the two pole by Swansea Mile (9/2) who forged on along the inner rail. Little Haarth followed him through and for fully two furlongs the pair were locked together in a battle for first place. It came down to the nod, with Little Haarth’s head in the right place on the line.

Trainer Des McDonogh said: “He's a lovely little horse. He only ran last week. He's had three weeks off between races but he's a great grubber and was getting a bit heavy. This looked a good opportunity.

“He was second at Ballinrobe to a very good horse (Alton Bay) and was only beaten three lengths the last day.

“It was a messy race and faster would be better for him as he stays well. He's a superb jumper and I can't wait to go jumping with him.”

Mr Steadfast, on debut for Gordon Elliott, was sent off the 13/8 favourite but finished sixth.