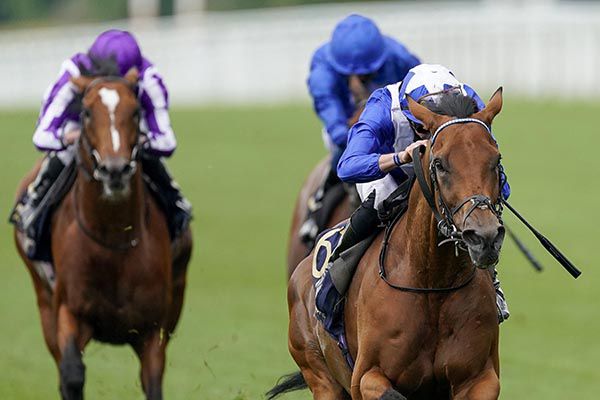 Lord North produced a devastating turn of foot to run out a convincing winner of the Prince of Wales’s Stakes at Royal Ascot.

Stepping up to Group One company for the first time, last year’s Cambridgeshire winner bridged the gap in some style.

John Gosden’s charge had looked good when winning the Group Three Brigadier Gerard Stakes at Haydock earlier this month — but this was even better as he destroyed a quality field.

Bangkok made the running with Addeybb and Japan close up, while James Doyle was happy to sit Lord North (5-1) at the rear of the seven runners.

At one point in the straight, all seven had a chance but Lord North put the race to bed with a taking burst of acceleration in the final furlong.

Galloping on strongly, he had three and three-quarter lengths in hand over Addeybb. Barney Roy was third, with short-priced favourite Japan having to settle for fourth.

Gosden said: “Rab Havlin was going to ride this horse (with Frankie Dettori riding Mehdaayih), but James is retained by Godolphin Darley and consequently he rode him.

“It does bring back memories of Halling (who also won the Cambridgeshire before progressing to Group Ones). This is a very progressive horse.

“They went a very strong gallop today — there was no hiding place. They didn’t stop for a breather — they kept going the whole way.

“The favourite missed the break, which muddled the race for him, but this is a proper horse. He sat out the back and won with great authority — he could have waited even longer.

“He has got that turn of foot, but he is quickening and those in front were tiring a bit. This mile and a quarter takes some getting from Swinley Bottom, it rises many feet.”

Lord North will not go on to enjoy a lucrative career at stud, having been gelded in the middle of last season.

Gosden added: “That decision was taken out my hands. Testosterone is the most dangerous drug in the world and it was certainly driving him completely mad!

“Since he’s been gelded he’s a very content, still very playful horse, but he’s not crazy like he used to be.

“We’ve always thought he was a very classy horse. It’s taken a long time to get it out of him, but that has always been more to do with the mind than anything else.”

Asked whether he could take on his esteemed stablemate Enable in the Coral-Eclipse at Sandown on July 5, Gosden said: “He’s had two pretty quick races. Let’s just freshen him up and see how we are over the next 10 days and then we’ll make decisions.

“He might get a mile and a half at Keeneland (in the Breeders’ Cup Turf, with this being a ‘win and you’re in race’). I just hope it doesn’t rain too much as that track turns into a bit of a sandpit when it does.”

Doyle said: “I think when John takes a horse into a race like this you do have to prick your ears, and he was quite unexposed.

“He’s gone through the grades. He won the Brigadier Gerard at Haydock but looked to get a bit tired and John said he’d definitely improve a lot for that run. I thought going into it the vibes were all pretty confident from Mr Gosden’s camp.

“I guess it played into my hands the way the race panned out, but I felt it was a pretty evenly-run race, he settled beautifully out the back and showed a good turn of pace when I asked him, so it certainly wasn’t a fluke.

“I think he can continue now and be a pretty strong force in these type of races. A mile and a quarter is perfect for him.”

William Haggas said of Addeybb, who has already won two Group Ones this year from his visit to Australia: “I’m proud of him. He ran a great race, but he is better on softer ground. He ran terrific and tried his heart out.

“If I keep running him on good ground he won’t keep doing that though. He has become a very high-class, consistent horse. He is more effective on soft ground, but he ran a great race.”

Charlie Appleby added of Barney Roy: “I was pleased. He has run well and he saw the 10 furlongs out well. The winner has been very impressive in the end, but you could have thrown a blanket over the rest of them. He might be a horse to go to Australia with, if we are allowed. Some of those tracks might suit him.”