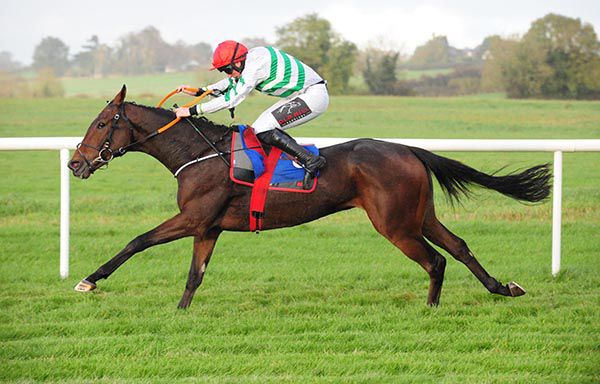 Former Denis Murphy placed point-to-pointer The Bosses Oscar made a winning start on the track today in the Munster INH Flat Race at Thurles.

Jamie Codd rode the Oscar youngster ‘between the flags,’ and he was aboard again on this occasion as the well-backed favourite (2/1 into 6/4) began for Gordon Elliott.

There could be some enjoyable days ahead for all connected to The Bosses Oscar, judging by the way he disposed of Bombay Blue and Pottlerath by four and a half lengths and three parts of a length.

"He is not really a bumper horse and we'll go jumping now and we'll have lots of fun with him. He is owned by the yard sponsor and they have invested in a few nice horses so it's nice to get them a few winners," said Elliott.

"He'll run in a maiden hurdle next and he wants further; Jamie said he was going as hard as he could turning in."